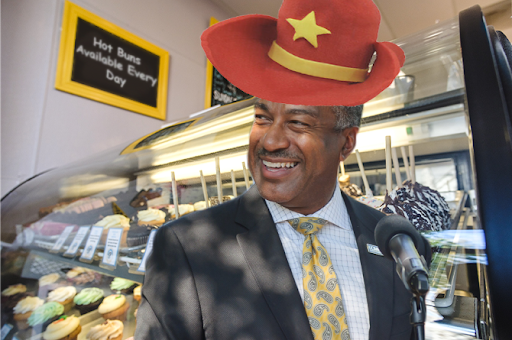 Because what else would it be called?

Preheat those ovens, because UC Davis is getting a new on-campus bakery, courtesy of a large donation made by the chancellor. The bakery, which will be called the “Gary Maykerey” will feature all kinds of recipes from the chancellor himself and is scheduled to open in the fall.

While no one is protesting more sweets on campus, everyone’s wondering why the chancellor would drop such a large donation on the school to open a bakery.

Apparently, during a recent photoshoot where Chancellor Gary May was dressed to help celebrate the opening of the new cow wrangling major, multiple online comments complimented the chancellor on his “cake.” Unbeknownst to everyone, the chancellor had actually baked a cowboy-hat-shaped cake for the celebration. With such encouraging comments detailing how “fine” and “juicy” his cake was, May was inspired to follow his heart and open his very own bakery.

Soon students will be doing everything they can to get their mouths on one of these delicious delicacies. While the menu is subject to change, the chancellor has said that it will be based on different aspects of Davis. Such items include:

Although half of the menu may not actually be edible, students’ mouths are already foaming in anticipation of filling their Instagram feeds with all kinds of pictures of these cute pastries. While the original cowboy hat cake is not on the menu, the chancellor has ensured us that there’s plenty of cake to go around. So this fall, make sure you head on down to the Gary Maykerey and cut yourself a wonderful slice of cake.

Written by: Ian Cosner — iacosner@ucdavis.edu
Disclaimer: (This article is humor and/or satire, and its content is purely fictional. The story and or names of “sources” are fictionalized.)