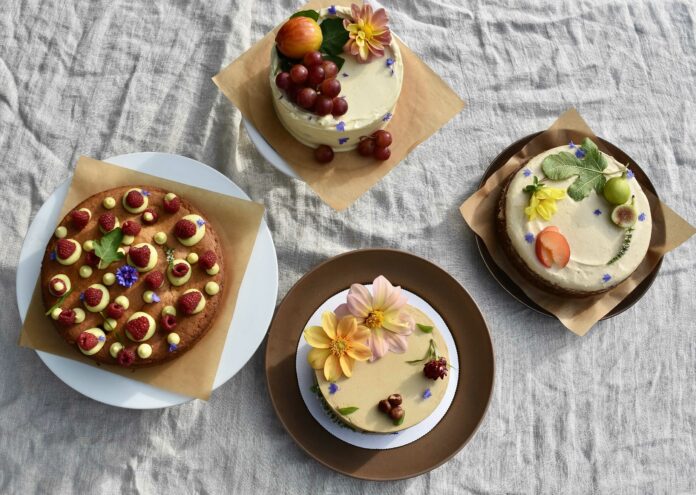 UC Davis alumna Deirdre Feeley wanted to be a pastry chef growing up, but like many people, pastry became more of a hobby as she grew older and her interest in plant science took precedence as a possible career path. However, during her time at UC Davis, her passion for pastry resurfaced, and she now operates her own micro-bakery in North Oakland, Driftwood Baking. Feeley attributes much of the success of Driftwood to her undergraduate experiences at UC Davis.

During her time at Davis, Feeley lived in the co-operative Turtle House, where two of her roommates began an “underground supper club” in 2016. Feeley joined the club — called “Tortuga” — as the pastry chef when they were getting started and mostly cooking for friends, but she said that the club began to take off not long after.

“I joined on as a pastry chef and we developed menus together and hosted [meals],” Feeley said. “At first it was friends, but then it quickly turned into strangers and adults from the community who were coming and eating.”

Eventually, Tortuga became a monthly pop-up. Feeley and the founders, Larry and Kaia, began taking reservations and serving two seated dinners each month. Feeley said that this experience was pivotal in her decision to pursue a culinary career.

“It brought back my passion for pastry,” Feeley said. “I feel like that moment and that project re-unlocked pastry for me, and I just decided to try it.”

During the summer of 2016, while Feeley was still living at Turtle House, she began baking croissants out of her home kitchen. Croissants are Feeley’s favorite food, but she said she could not find  quality croissants when she moved to Davis, so she decided to make and sell her own.

“That’s when Driftwood first came into fruition,” Feeley said. “That was super tiny. I was putting out as many croissants as I could make on the weekends and taking pre-orders. I was selling like 40 croissants a weekend. It was at a very tiny scale.”

When fall quarter began, Driftwood was put on the back burner. Feeley refocused on her plant science studies, internship at UC Davis’s student farm and work at a viticulture lab on campus. It was at that lab that she met a mentor — Professor Alan Tenscher — who inspired her to follow her dream to become a chef.

“He called it ‘killing the dream,’” Feeley said. “He said if you have a dream, you either […] chase it down and it becomes a reality, or you put it to bed and decide that it’s not your dream anymore and it’s not what you want to be doing.”

Feeley was approaching the end of her time at Davis and was not sure whether she wanted to begin looking for jobs in plant science. She still felt drawn to pastry, but was not sure if it was a feasible career path.

“I was currently studying plant biology, working in a viticulture lab — I was on [that] track,” Feeley said. “This pastry thing was a passion that had come up, not related to anything I was doing and [Tenscher] said, ‘you either chase your dream [in pastry] and then you come back to plant science, or that dream becomes what you’re doing.”

Feeley decided to take Tenscher’s advice, and upon finishing her undergraduate degree in 2018, she began working in pastry at Tartine Bakery in San Francisco before getting another position at Acme Bakery. When the COVID-19 pandemic began in March of 2020, she felt lucky to keep her job at Acme Bakery, where she was working in recipe development, but she wanted to make a change in her career trajectory.

Many of Feeley’s industry friends had lost their jobs when COVID-19 closures shut down their bakeries and restaurants, prompting them to open independent “pop-ups” serving their own food. Seeing this, Feeley was inspired to leave the corporate kitchen and pursue a pop-up herself.

An independent micro-bakery “aligned well with where I was feeling professionally because I was feeling without opportunities to express myself creatively,” Feeley said. “I wasn’t in a position where I was chef, so I didn’t have a lot of creative say. I was doing recipe development, so I was having more creative expression than others, but not enough for me.”

Feeley re-opened Driftwood Baking in December 2020, offering a menu of holiday-themed cookies and candy boxes. Since then, she has been hosting monthly pop-ups featuring new pastry menus each month, as well as taking custom cake orders. She operates this micro-bakery out of her home oven, and creates four to seven new recipes monthly.

“I view this as a creative outlet and a creative project more than just a bakery or a means to an income,” Feeley said. “I really enjoy getting to continuously create new recipes.”

Despite the success of Driftwood over the past nine months, Feeley is not looking to expand. She recently moved to Los Angeles and is pursuing a career outside of the kitchen, as she does not want to rely on it for income. She also does not particularly want to grow Driftwood, as she has found it invites a “toxic” kitchen environment that is prevalent in the industry.

Feeley said that corporate kitchen culture can be full of anger and violence, and that in corporate kitchens, she has found that sexual harassment commonly goes unchecked. By keeping Driftwood small, she hopes to keep it away from that toxicity.

“It’s a little precious thing that I don’t want to be compromised,” Feeley said. “I don’t want to have to try to rely on it for my income because then I don’t want to be pushing production first. I want it to just be a creative project where I have another income and then I’m able to let the products shine.”

Despite Driftwood being a “hobby” for Feeley, it is a time-consuming production. She said that the two weeks before pop-up menus go live, she spends the majority of her time preparing recipes. Sometimes, recipes can be perfected in just three iterations, but others she ends up testing more than six times before she is content. Generally, she spends one week brainstorming recipe ideas and researching ingredients, and another week perfecting cook time, measurements and ingredients.

As for recipe creation, Feeley is inspired by the seasons and what she learned about seasonal produce working at the student farm at UC Davis.

“I let my creativity lead,” Feeley said. “I draw a ton of inspiration from my time at Davis. [My] experience really honed my love of nature and my appreciation of how the seasons ebb and flow and how nature really provides for us. Every different season a new fruit is coming in. In the winter it gets cold, but then there are oranges that are full of bright juice. I really tried to emulate sentiments in my desserts [and] highlight the season at that moment and its beauty.”

She also prioritizes sourcing local ingredients for her recipes, both to lessen her environmental footprint and maintain the quality of her food.

“Even if you don’t focus on ‘sustainability,’ I think it’s important to emphasize the fact that these methods just lead to better food,” Feeley said. “Sustainability is appealing beyond environmental impact and social impact because when you eat local and when you eat well-grown food, you can taste it.”

Feeley sources hyper-local produce from California and neighboring states and does not use products grown with heavy pesticides. She also prioritizes working with farms that pay living wages to their staff and foster healthy working environments.

Currently, Feeley is preparing for her October pop-up, for which she is brainstorming a pastry menu that captures the current season — the transition from summer to fall. One ingredient she feels captures this essence is fresh pears.

“I love pears and chocolate, but for me personally, it feels too warm for chocolate,” Feeley said. “I view chocolate as very heavy in that it warms me up in the winter, so I would turn to something lighter like almonds. Almond frangipane goes really nicely with pear so maybe I would do those together and kind of play on this early autumn, late summer flux point where warm spices are welcome, but we still want a little bit of juicy brightness from the summer.”

For information on the date and location of Feeley’s October pop-up, which will be in North Oakland, as well as for custom cake orders, visit Driftwood’s website or follow the bakery on Instagram.

Classes that all underclassmen should take, according to upperclassmen