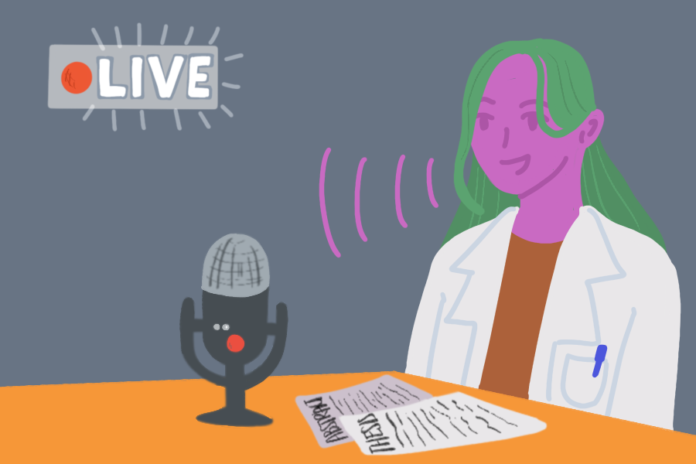 UC Davis researchers speak to the experience of sharing their work through podcasts.

The British Journal of Educational Technology advocates for podcasts as a valid channel for putting forth research, as the medium boasts a host of benefits for researchers hoping to communicate their work beyond academic journals and those who are already plugged into the literature. Storytelling and immersive audio qualities inherent to podcasts add a personalized dimension to research, allowing experts to explain it in a way that renders knowledge digestible to more general audiences.

UC Davis graduate student Ashley Teodorson-Taggart echoed these notions in a talk she gave in a series called “PhD Unlimited: Podcasting the Humanities.”

“There’s long been a feeling that podcasting is a cool and interesting form of production, but it’s not necessarily considered legitimate within academia,” Taggart said. “If you’re publishing a journal article or you’re writing a book, that is considered in a very different light than, for example, if you’re producing a podcast.”

Taggart works in performance studies, which is a field that examines how social and cultural conditions influence human expression and the construction of knowledge.

“We’re really interested in questioning knowledge production — questioning its form and the methods, and how we can be creative and effective at communicating our research,” Taggart said. “So podcasting becomes a really interesting sort of venue because it speaks to some of the benefits of new media, allowing knowledge to be more accessible, and for us to disseminate it more easily.”

Taggart’s talk focused around podcasting the humanities, but the implications for the medium can be extended to all areas of expertise; podcast production requires minimal equipment, available to any field interested in utilizing it. When it comes to scientific research, podcasting can help in making technical information more digestible.

“So often when we’re reading scientific research, there is this sort of distance between the reader and what you’re reading — the data creates a space there,” Taggart said. “What podcasting allows is for some of that same research to be shared with a human voice behind it, and I think that that makes it a lot more accessible. I think that there really are some incredible opportunities to not only increase engagement with research but to really draw people in and allow them to connect in a more, sort of human way.”

Dr. Charan Ranganath, the head of UC Davis’ Dynamic Memory Lab, drew on his podcasting experiences to advocate for the medium.

“I’ve done quite a few podcast interviews now — I have been at UC Davis since 2002, and for much of that time print media, radio, and TV were the main vehicles for science communication,” Ranganath said via email. “But over the past few years, podcasts have become an amazing way to reach people, and now there are many intelligent, thoughtful, and fun podcasts that can help us get our message out to the public.”

Ranganath was featured on the “Every Little Thing” podcast in May this year, brought on as a memory expert to answer questions like ‘Did that memory really happen?’ In the episode, he suggested tips to a live caller in order to figure out the legitimacy of a specific memory.

“That was fun,” Ranganath said via email. “It was not about my research per se, they really were talking to me as an expert on memory, and that’s fine because I’m actually writing a book for the general public about how memory works.”

Right now, Ranganath and the Memory Lab are studying how we use our memories to make sense of the present and plan for the future. They are also working on projects that track the trajectory of memory over one’s lifetime and over the course of Alzheimer’s Disease. As Ranganath’s research begins to develop computational models to reverse engineer the brain, figuring out computational solutions and communicating these steps pose challenges for general communication.

“In general, I find that the challenge to science communication is that, as a scientist, you have to get deep into a topic in order to make progress, but for the general public, most of the things we have to work through are not particularly interesting,” Ranganath said via email. “So you have to keep it simple and have a punchy message while still doing justice to the science.”

However, podcasts hold the potential to preserve the integrity of the information.

“On conventional TV, radio, or print media, you can talk with someone for hours and everything is reduced to a few soundbites or phrases,” Ranganath said via email. “With podcasts, I generally find that there is more of an exchange of ideas. Podcasters generally have a great deal of curiosity, so they are really excited to talk, and I find they can ask some really interesting and thought-provoking questions.”

Justin Cox, the communications director of the UC Davis-funded SeaDoc Society — a scientifically-based organization with the goal of affecting change whether by inspiring people or influencing policy, discovered just that when he launched its podcast “Pod of Orcas” in the middle of the pandemic. When science nights at a local theater were canceled, Cox was inspired to create the podcast instead of attempting to replicate an in-person event.

“It felt like an opportunity to tell the full, cohesive story about this specific endangered species,” Cox said. “The logic was this: in addition to the people we get listening to it now, it will continue to exist. It almost feels like a book you can pick up and read over and over.”

The series consists of seven episodes of 40 to 60 minutes each. Cox spoke with a variety of guests who are experts in different topics. Here, science experts collaborated with communicators to create knowledge for the average listener.

“I don’t have that deep, deep level of expertise, but I think I was uniquely positioned to try to be a person that knows enough to ask good questions, and then maybe make this accessible beyond that bubble,” Cox said. “I think it’s smart enough and scientifically sound enough for it to be worth something that a scientific organization can produce, but also something that anyone could share with anybody, and they can learn about it.”

“The podcast fits into that in that it’s education and inspiration, and it’s meeting people where they are at,” Cox said. “And in making it, you just kind of take it one step at a time and hope the thing that you’re making at the end is good. I think that’s a beautiful thing about a lot of online media, but podcasting especially — there’s a low barrier of entry, which means there’s going to be a lot of bad stuff, but it also means anyone can try to make something that’s good too.