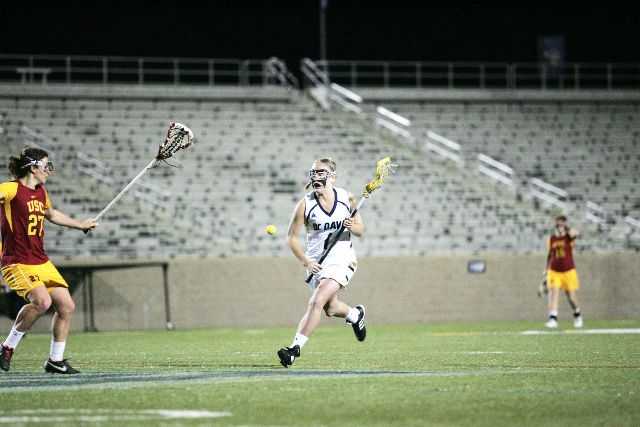 The women’s lacrosse team (3-8, 0-4) went 1-2 over spring break, despite facing the toughest back-to-back combination of opponents thus far this season. After demolishing Howard by a final score of 23-6, the Aggies squared off against Navy and Drexel, which are ranked 16th and 12th, respectively.

Senior Elizabeth Datino garnered MPSF Offensive Player of the Week honors, totaling 13 goals with four assists in the three games. In addition, she posted a career-high seven goals at Howard. She then went on to score hat tricks against both the Mids and Dragons. Against Navy, the Aggies rallied to within deficits of 5-3 and 8-5 early on before Navy pulled away in the middle-third of the contest.

The Aggies held a 5-3 lead late in the first half before a Drexel goal with only eight seconds left in the half. This ignited what became a 6-2 Dragon finish. Sophomore Kai Murphy accomplished her best game thus far, tallying eight sixes throughout the course of the game.

Senior Hannah Mirza scored a hat trick and had a fantastic all-around game against the No. 18 Mids. Furthermore, freshman midfielder Mary Doyle netted a career-high two goals to go with three draw controls. Currently, she is ranked second on the Aggies in the latter category with 27 behind Mirza’s 38.

“Looking back on the trip, it was a great experience,” said head coach Kate Henwood. “We represented UC Davis lacrosse well. I was proud of the team for their efforts. Playing teams of that caliber and being in those games will prepare us for coming back to face our toughest MPSF opponents. There is something about timing that you have to understand as a coach. I have been telling the team for two weeks that we are about to turn that corner. The Drexel game helped prove to our players and helped them understand that they belonged.”

Next, the Aggies faced the Denver Pioneers. Datino scored a hat trick and Landry combined four total points with a game-high nine draw controls. However, UC Davis was unable to hold on its halftime lead, falling 1-11 to their 20th-ranked opponents.

The Pioneers took a two-goal lead for the first time since early in the first half. The Aggies managed to battle back to an 11-11 tie, but Pioneer Secora converted a pass from Remenapp for the game-winner with six minutes left.

The Aggies will continue their MPSF play with a road game at Fresno State on Saturday at 2 p.m. Last season, the Aggies tamed the Bulldogs 21-5. Seniors Gina Hoffmire and Anna Geissbuhler each scored five goals to lead UC Davis to victory at the Aggies Stadium.

The Aggies never trailed during the game, drawing first blood off of senior Corsa’s successful eight-meter attempt just 71 seconds into the game. Geissbuhler punched in three goals after the break. Overall, the team outshot its opponent by a 45-6 margin and committed 12 fewer turnovers than the Bulldogs.

Fresno State’s record stands at 2-9, 0-4 in conference and 1-5 in away games. They have lost their past three games. Their last loss was against San Diego State 18-8. The Bulldogs will face Oregon before taking on UC Davis.

VEENA BANSAL can be reached at sports@theaggie.org.