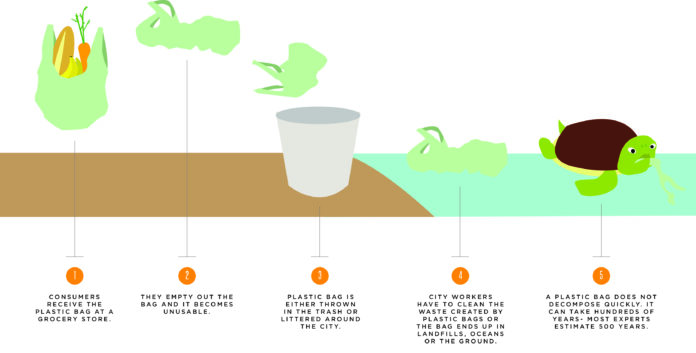 Starting in 2014, shoppers will no longer receive non-reusable plastic bags from retailers at checkout. The Davis City Council has voted to ban the distribution of single-use plastic bags. Citizens will have to bring their own bags, or purchase paper bags for $0.10.

Small plastic bags used for bagging produce and other perishable food items will still be available in supermarkets for sanitary purposes. Additionally, thick plastic bags, such as bags from Forever 21, will not be banned because their thickness and durability causes them to be classified as reusable.

The specific wording of the ordinance is still being finalized, but will be released after city council votes to pass it on Oct. 8.

Other areas of California and the United States have similar bans coming into practice in the future as well. According to a recent article in The Huffington Post, the plastic bag ban in major retail stores in the City of Los Angeles will be launched at approximately the same time as the ban in Davis. Plastic bag bans are already in place in the cities of San Francisco and Santa Monica.

According to the same article in the Huffington Post, the City of Los Angeles spends about $2 million a year to clean up plastic bag waste, a problem that is shared in smaller scale by the City of Davis.

“Plastic bags make up the largest amount of waste in our green waste,” said Mayor Joe Krovoza. “The amount of time that it takes to manage all of the plastic bags is much greater than anyone imagines.”

According Krovoza, the bag ban in the City of Davis is one of the most comprehensive bans in place today. The ban will significantly reduce the amount of soft plastic waste that ends up in landfills or in public areas that city workers have to clean.

“This wasn’t just about banning bags. We did this as part of an overhaul of the waste management system of Davis,” Krovoza said. “It’s about how we’re [The City of Davis] going to move forward to the next step to improve waste management in the city.”

Krovoza expects the bag ban to be well received in Davis, a city that has been well known as a leader in environmental progress since it implemented the nation’s first bike lanes in 1964.

“This is a culture that supports recycling and reusing,” Krovoza said.

UC Davis students also seem to be in support of the bag ban. California Public Interest Group, (CALPIRG), has lobbied tirelessly for the ban over the past year, and has received a lot of positive support from students.

“We got a petition with almost 10,000 signatures from UC Davis students,” said Donna Farvard, the president of the UC Davis chapter of CALPIRG. “That’s almost one in three students who wanted to see the ban happen.”

While some citizens of the City of Davis may be unhappy that they will no longer be receiving plastic bags at checkout, Krovoza said that the ban only aims to “give an economic value” to the bags.

Even though the bags won’t be freely handed out anymore, consumers can purchase similar receptacles at the grocery store as they would any other plastic good.

“If someone values plastic bags, they can purchase them elsewhere,” Krovoza said. “We just don’t want to give them away.”

City Council member Brett Lee wishes that instead of banning plastic bags completely, the ordinance would allow people to pay for plastic bags as well as paper if they wanted.

“If plastic bags are disposed of properly, they aren’t that harmful,” Lee said.

Lee added that he is in support of the pending plastic bag ban because it is better than no ban.

A few stores in the City of Davis have already initiated a similar program. For instance, at the UC Davis Memorial Union Bookstore, patrons pay $0.25 for each bag that they purchase.

Since the $0.25 fee was implemented in January 2012, it has received mixed reviews from consumers.

“It’s frustrating to spend hundreds of dollars of textbooks from the bookstore, and then be asked to buy a bag,” said Anne Kovino, mother of a UC Davis first-year. “[It’s] insulting.”

Other patrons appreciate the bookstore’s attempt to cut down on plastic waste.

Whole Foods, a chain of supermarkets known to be eco-friendly, has banned the distribution of single-use plastic bags in their stores since Earth Day in 2008.

While Whole Foods doesn’t currently charge for their paper bags, as retailers in the City of Davis eventually will, they do offer a rebate for customers who bring their own bags, according to Whole Foods Davis Marketing Manager Kristen Tantarelli.

For each reusable bag used, Whole Foods will donate a nickel to the charity that they’re currently supporting. Last quarter, Whole Foods donated the rebates to the Davis High School band. Currently, they are collecting money for improvements to the UC Davis Arboretum.

For major retailers, the ban will most likely be initiated in January 2014, while smaller retailers in the City of Davis will be affected in July 2014.