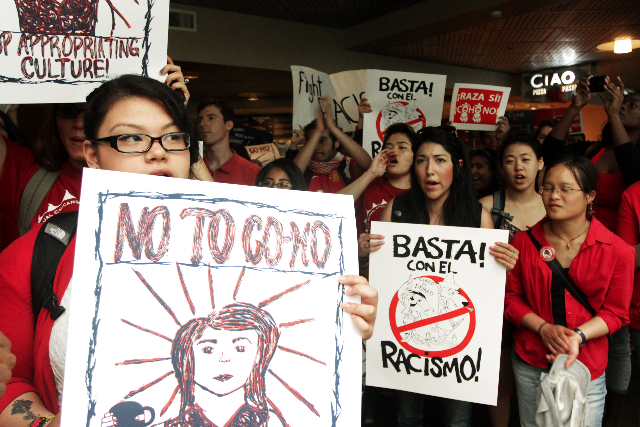 On May 2 at 11:30 a.m., around 100 students gathered at the Memorial Union flagpole, wearing red in solidarity and holding signs and banners with phrases like “We’re a culture! Not a costume!”

The students were protesting the ASUCD Coffee House (CoHo) in reaction to a recent Facebook event called “Cinco de Drinko Sloshball,” which was apparently made by and for CoHo employees. The event cover photo depicted four people in sombreros, ponchos and mustaches standing behind a fence, and two others dressed as border patrol police. In the description, the event planners wrote, “come drink a few cervesas and siesta out on the grass…grab those sombreros, and we’ll see you all there bright and early!” The event was scheduled for May 3, falling on the same day as La Gran Tardeada, the culmination of the week-long celebration of La Raza Cultural Days.

“Students are having a sit-in to peacefully get the message across to the University and CoHo employees to stop racially insensitive parties,” said Armando Figueroa, ASUCD president and a fourth-year Chicana/o studies and sociology double major. “The CoHo seems to be a platform [for racial insensitivity] because this is the second time that this has happened this month, [following] an event called “Holy Land” which had racially charged depictions of Muslims.”

According to Figueroa, the Holy Land event resulted in racially charged depictions of a Muslim dressed as a terrorist.

The May 2 protest was organized via a Facebook event arranged by Jackie Santizo, a fourth-year Chicana/o studies and sociology double major, and included a 40-minute sit-in inside the CoHo and a boycott of all CoHo items until one or more of the group’s demands were met.

Multiple members of the UC Davis administration observed the event, including Chancellor Linda P.B. Katehi, who voiced her support for the protesting students.

“That event that was organized was inappropriate and it was an event that really promotes stereotypes,” Katehi said. “I’m against any effort to stereotype any group and I‘m going to be sympathizing with those who object to it.”

The students chanted “UC Davis isn’t safe!” as they entered the CoHo from the south side at 11:45 a.m., and then gathered in the main walking area and waited for the organizers to speak.

The demands presented during the speech included creating a forum or safe space for CoHo employees and all other ASUCD units where they can share concerns, involving UC Davis Counseling Services as an accessible resource to those student employees, meeting with the chancellor and others to discuss the climate of racism on campus and documenting the consequences of student employee actions violating UC Davis policy not only within the CoHo, but within all ASUCD units.

The leaders of the sit-in held that the boycott would cease when one or more of the 12 demands were met.

The protest spanned beyond the UC Davis Chicano community, according toMichelle Villegas, a 2012 alumna who majored in Chicana/o studies and sociology and is a major voice behind the protest.

“The purpose of this was to let folks see that we are here, we are upset about this and we’re not just going to sit back and let these things happen,” Villegas said. “That doesn’t just include Chicano, Latino students, it includes students of all different types of backgrounds.”

Adriana Arrambide, a fourth-year majoring in environmental policy analysis and planning, expressed her disappointment with the lack of change in climate throughout her time at UC Davis, and recalled how in her sophomore year she had gone into an administrative building for advising and was mistaken for a cleaning lady by an office administrator.

“Here I am [in] my fourth year, and it’s still happening. When I see pictures of Cinco de Drinko, when I see pictures of someone mocking border patrol, not knowing remotely how hard it is to cross the border … it just disgusts me,” Arrambide said. “I see this list of demands that we’re making and I think it’s the minimum. That’s the least the administration could do for us.”

Outside the CoHo, close to where the protesters initially gathered, a group of four students were wearing sombreros, including Dylan, a fourth-year civil engineering major, who requested his last name not be mentioned.

“It’s comfortable and keeps the sun off my neck,” Dylan said. “I understand people are offended, people are hurt, just in my opinion it’s not racist or anything.”

According to Villegas, however, those students were an example of an instance of racism on campus.

“That just shows that on this campus, that’s the mentality. People don’t want to be open-minded, people don’t want to sit and dialogue,” Villegas said. “It’s upsetting obviously, like you want to go up and say like ‘hey what the hell are you doing wearing that,’ but in this case, you know, we wanted to make sure that it remained peaceful.”

Sabrina Sanchez, a first-year student majoring in political science and another organizer of the protest, agreed with Villegas and said that it put on display what needs to change.

“I definitely think we had a really good turnout,” Sanchez said. “But there definitely needs to be more done, and this is just the beginning.”

ELLY OLTERSDORF can be reached at features@theaggie.org.