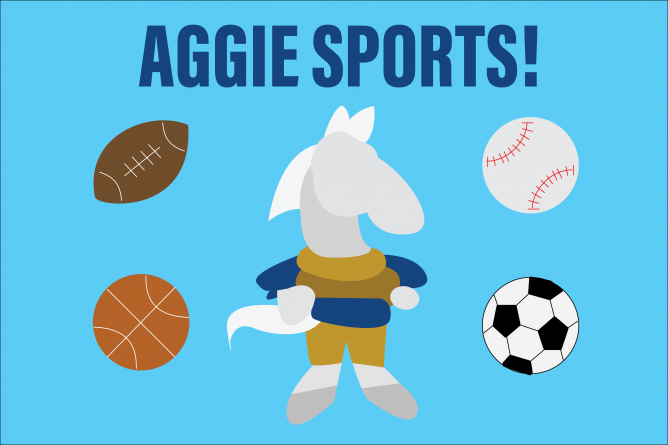 After a fruitful 2018, Aggie Athletics just beginning to scratch the surface

Nestled in a small town a stone’s throw away from Sacramento, UC Davis is known more widely for being one of the best public universities in the country than it is for catapulting its student athletes to the professional ranks. We are known more for having the best veterinary school in the nation than we are for capturing conference championships or earning March Madness bids. At UC Davis, we’re known for having the best agricultural program in the country, but brandishing Aggies on our chests now tells a different story — a story deeper than our affinity for bicycles and “picnics.”

2018 marked the 118th year UC Davis has competed in intercollegiate sports, and what a year it has been. In November, the university announced plans in conjunction with UC Davis Health to build a brand new student-athlete performance center. The 38,000 square foot facility is expected to fetch a price tag of more than $40 million. The new center will provide better services for current Aggie athletes as well as serve as a beacon for potential recruits as Davis continues its Division 1 transition.

The center represents a growing commitment by UC Davis’ Director of Athletics Kevin Blue to take the Aggies to the next level. Blue saw that commitment pay throughout the last school year, during which time UC Davis enjoyed one of its most successful athletic years.

Here are some of the year’s most compelling storylines:

After taking the reins of the football program in 2016, Head Coach Dan Hawkins has been on a mission to turn the program around. In 2018, the Aggies finished with a 10-3 record and captured their first Big Sky Championship in school history.

Junior quarterback Jake Maier threw for 34 touchdowns on his way to winning Big Sky Offensive Player of the Year. The handy recipient of 9 of those touchdowns was 2019 graduate Keelan Doss, who also made First-Team All-Conference. Doss was snubbed in the NFL Draft, but signed with the Oakland Raiders not long after, and is currently fighting for a position on their roster.

If you’re still not on the women’s basketball train, I promise you it’s not too late to hop on. The women’s hoopers finished the season 25-7 – 12-1 when playing in front of the Aggie Pack and were catapulted to a Big West conference title for the second time in program history. Behind strong senior leadership, the Aggies earned a berth in the NCAA tournament for the first time since 2011.

Of their experienced core, UC Davis will particularly miss the splash-sister backcourt of Karley Eaton and Kourtney Eaton, as well as 6-foot-4 jack-of-all-trades Morgan Bertsch. Bertsch will be carrying her Aggie pride with her well beyond the hardwood of The Pavilion. In April, she became the first player in UC Davis history to be drafted to the WNBA — one of only 36 women chosen to compete on basketball’s highest stage. Though Bertsch was waived by the Dallas Wings in May, she plans to play overseas until she can give the WNBA another crack.

Despite ending the year 39-14, the softball team missed out on its ultimate goal of winning the Big West Conference. Backed by the steady bats of junior outfielder Alyse Rojas and senior outfielder Marisa Given, however, their nucleus is poised to achieve their goal this upcoming season.

The Aggies will continue to lean heavily on pitching phenom Brooke Yanez in 2020. Last year, the junior finished league-best in strikeouts (273), ERA (1.03) and wins (25), making her the first Aggie to both be named on the All-American Second-Team and earn Big West Pitcher of the Year.

The women’s water polo team missed out on a conference title, but showed promise behind now-sophomore standout Noelle Wijnbelt. After scrawling her name into the UC Davis record books with a 20-game scoring streak and 54 total goals, the Big West Freshman of the Year was named to the All-American Third-Team.

Men’s water polo dominated the regular season, finishing 18-8 and tied for first in the WWPA. The Aggies ultimately fell just short of the conference championship, losing a heartbreaker to UC San Diego in the title match.

Swimmer Solie Laughlin wrapped up a decorated Davis career in 2019, officially becoming the most successful swimmer in school history. Laughlin, a psychology major, was selected to First-Team All-MPSF in 200m backstroke, 200m and 400m IM, and Second-Team in 200m and 400m Medley Relay. Her dominance in the pool earned her a spot at the 2020 Olympic Trials, which is set to take place next June.

After being named Big West Freshman Field Player of the year in 2018, sophomore shortstop Tanner Murray continued to be a bright spot for the Aggies in 2019. Murray led the baseball team in 10 categories, including batting average (.364), runs (37), hits (71), doubles (16), triples (4) and slugging percentage (.503) on his way to his second consecutive All-Conference Second-Team selection.

Senior golfer Christine Danielsson completed a stellar season in 2019. The Paris-born standout qualified for the NCAA regionals, and was named Big West Women’s Golf Player of the Year, becoming the second Aggie in many years to capture the award.

UC Davis has continued its commitment toward the advancement of women’s athletics with the the official introduction of Beach Volleyball and Equestrian teams.

Led by head coach and former professional Ali McCulloch, beach volleyball got off to a quick start in March before ultimately finishing 8-10. But the new program showed promise, and McCulloch intends to continue recruiting and building the budding program.

The addition of the equestrian program was also a unique landmark for the university. The team is “partnering with the School of Veterinary Medicine and the College of Agricultural and Environmental Sciences — both regarded as world-leaders in teaching and research in their respective fields,” according to the UC Davis School of Veterinary Medicine.

In an interview with the Davis Enterprise, UC Davis Chancellor Gary May recognized and supported the commitment to UC Davis Athletics.

“We have a real commitment to, first, the academic mission of the university among the student-athlete population,” May said. “[We also] have a competitive spirit in wanting to be better at representing the university.”

Aggie Athletics showed great promise in 2018, but with increasing support from a variety of sources, we are only just scratching the surface.