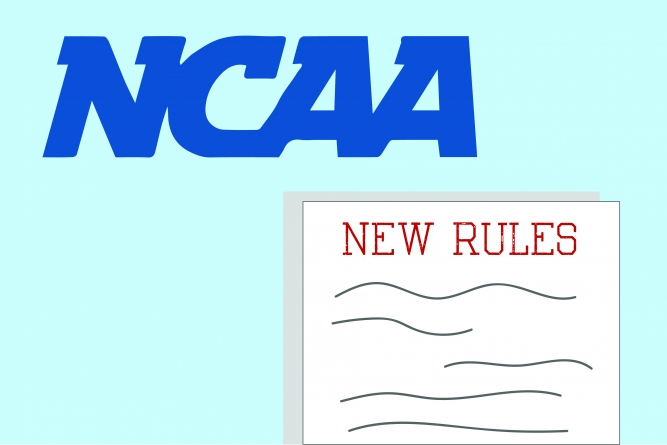 On the morning of Oct. 29, the National Collegiate Athletic Association’s Board of Governors announced its plans to revise NCAA rules to allow college athletes to be compensated for their own name, image and likeness. This announcement came as a surprise to many, especially to those who have heavily criticized the NCAA for its ardent stance against student athlete name, image and likeness compensation in the past.

“In the Association’s continuing efforts to support college athletes, the NCAA’s top governing board voted unanimously to permit students participating in athletics the opportunity to benefit from the use of their name, image and likeness in a manner consistent with the collegiate model,” the NCAA stated in a press release. “We must embrace change to provide the best possible experience for college athletes.”

After California Senate Bill 206 — also known as the “Fair Pay to Play Act” — was signed into law by Calif. Governor Gavin Newsom on Sept. 30, there was confusion over how the changes could affect college athletics going forward. Nonetheless, a number of other states have begun putting together the frameworks of similar bills immediately following SB 206’s signing.

All signs pointed to additional states eventually following California’s lead, likely pressuring the NCAA and playing a role in its most recent decision to revise its rules. The decision from the NCAA has caused many to believe that it saw no point in fighting the growing tide and rather embrace the change. As of now, there is no clear timeline as to when these changes are going to be made or implemented, but according to board chair Michael V. Drake, the decision prompts the NCAA to begin the process “immediately.”

“The board’s action was based on comprehensive recommendations from the NCAA Board of Governors Federal and State Legislation Working Group, which includes presidents, commissioners, athletics directors, administrators and student-athletes,” the NCAA’s statement added. “The group gathered input over the past several months from numerous stakeholders, including current and former student-athletes, coaches, presidents, faculty and commissioners across all three divisions. The board also directed continued and productive engagement with legislators.”

When reached for comment after the report from the NCAA Board of Governor’s was released, UC Davis Director of Athletics Kevin Blue provided the following statement to The California Aggie:

“In recent years, there has been increased national discussion about the economic rights of student-athletes, and whether they are fairly compensated for participating in college sports.

Often, debates on this topic are driven by questions about whether student-athletes are able to receive a proper education while playing sports (i.e., and therefore legitimately reap the benefits of their scholarship) or if student-athletes should share in the revenue that is created by lucrative media contracts.

At UC Davis, our student-athletes annually are enrolled in approximately 70 majors and graduate at rates that match or exceed our accomplished undergraduate student body. We also extensively support the non-sports career development of our student-athletes through our comprehensive Aggie EVO program. Additionally, at our mid-major level of Division I, there is much less media revenue being generated. Accordingly, I don’t believe that many of the concerns cited about the fairness of student-athlete compensation apply here.

However, I also believe that all student-athletes, like all other students, have a fundamental right to own and legally monetize their name, image, and likeness. I am encouraged by the recent announcement from its Board of Governors that the NCAA plans to move college athletics down this path. I do believe that college athletics can and must maintain its educational roots while also evolving in a modern way.

A challenge that the NCAA is currently working through is how to implement this modernized philosophical direction in the context of a competitive recruiting environment. Effective regulations are necessary to ensure that name, image, and likeness compensation isn’t manipulated into recruiting inducements that do not reflect real market value. I am hopeful that the NCAA will arrive at a regulatory structure that modernizes the economic rights of student-athletes, prioritizes fairness in recruiting, and allows schools like UC Davis to continue competing successfully while we maintain our emphasis on the educational foundations of college athletics.”

Even after this landmark decision for amateur athletics, there are still a lot of questions as to what rules must be put in place to continue to have a level playing field. As Blue indicates, it remains unclear how the new rules will affect smaller, mid-major athletic programs like UC Davis, if at all. It is still very early, but a number of details must be resolved before the new rules can be put into effect, mainly with the goal of preventing some schools from having an advantage over others.

There is still much time for that and, as NCAA President Mark Emmert states, there are many more decisions that must be made going forward.

“As a national governing body, the NCAA is uniquely positioned to modify its rules to ensure fairness and a level playing field for student-athletes,” Emmert said. “The board’s action today creates a path to enhance opportunities for student-athletes while ensuring they compete against students and not professionals.”

This is no doubt a monumental step in the right direction for those who believe student athletes should have the chance to receive additional compensation. But this debate that has long clouded college athletics is incredibly complex and requires a lot of patience.

As much as many people want student athletes to be able to profit off themselves, it is worth ensuring that the new changes do not lead to further competitive inequalities. Regardless, the NCAA’s decision shows that it is willing to move forward and embrace change. It seems that after much criticism has surrounded college athletics, there has finally been a huge step that will begin a new era.