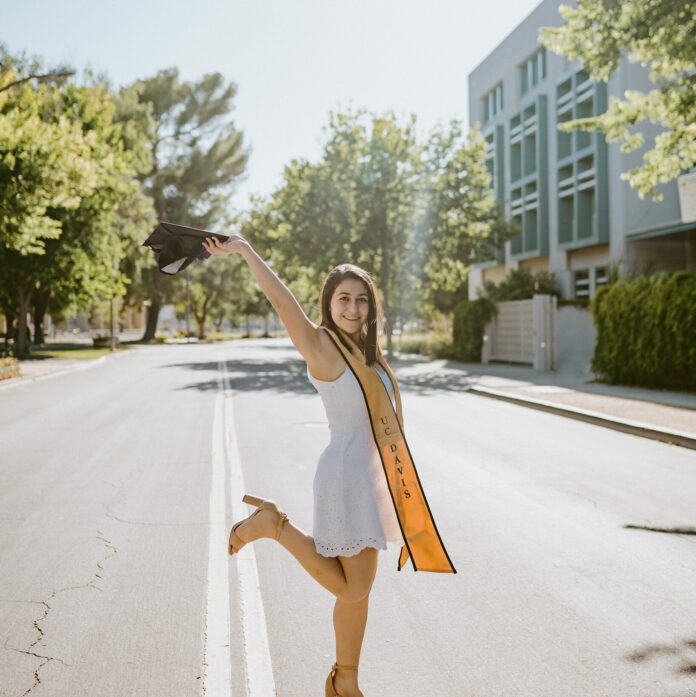 All I do is talk to or brag about the people in my life, so it should come as no surprise that my senior column is dedicated to them and the magical cowtown I’ve called home for these last four years

Someone once told me I should look into getting a job as a filibusterer. Probably because anyone who has met me for a brief moment knows I could talk to a brick wall (not my own words, unfortunately). For once, I am speechless. I don’t know how to express my gratitude—any words I could offer don’t seem to be enough.

I suppose I’ll start with thanking Davis for giving me my family.

To my very best friend, Katie, I can’t believe I get to do my favorite things in life with my favorite person (you). I know for a fact we’ll be telling stories of living together at each other’s weddings, just as I know for a fact we’ll be part of each other’s weddings. Cheers to many more years of tossing, playing pickleball, skiing and snowboarding, late-night phone calls and weekend trips to see one another. I truly cannot wait until we get to travel together.

To Parker, I’m so glad we’re going to end up on the same (and correct) side of the best state. I once said I’d take a plane across the country for your next birthday—that’s still true, although fingers crossed I’ll be taking one across the world instead for your 24th. I love your stubbornness, your ability to laugh at yourself and how much you’ve grown since we were toddlers in the dorms, and I’m so excited for this next phase of our lives.

Cady, I know Greg said you’ll be lucky to keep in touch with four people from college, but I’m not too worried about it. I know we’ll see each other again and I know when we do, we’ll pick up right where we left off. Keep being your spicy, quick-witted, forgiving self that everyone around you loves so much. Sarah, Washington is lucky to have you—as am I, because I know you’ll do some cleaning up before I get there (literally, your soon-to-be spotless house and figuratively, our legislation.)

I would say I’m going to miss Calvin’s sound effects (pew pew!), Eden’s snide comments (okay!), Margo’s ability to make me laugh with everything she says (well, you didn’t have anything else!), Omar’s wall-worthy quotes (Sabrina was pressing me yesterday), Allie’s athleticism (Calvin, get up!), late night walks with Sophie (I can’t while you’re filming me!), early morning pickleball with Anjini (the only other person willing to wake up early to play) and arguing with Maddie (a great driver). I would say I’m going to miss all of those things and more, but I know this won’t be the last time I experience any of them. In the meantime, carry on my pickleball legacy, say yes to everything because I won’t be there to convince you to have fun and don’t forget to PAY ATTENTION!

As if a family is not enough, UC Davis has given me the most inspiring people to look up to.

To one of my first professors, Dr. Caitlin Patler, thank you for seeing something in me that I had not yet seen myself. It’s not always easy to find a woman mentor, but your accomplishments and compassion give me something to strive toward. I can’t wait to keep up with your groundbreaking research—I’m sure I’ll see future writers from The Aggie continue reporting on it. Also, go Bruins!

To my thesis advisor and widely beloved UC Davis faculty member, Dr. Jim Adams, I have so much to thank you for, but I think I’ll start with your humor, because I’ve never laughed quite so much in any other course I’ve taken here. Beyond that, thank you for your constant guidance, incredibly kind words and willingness to help in virtually any situation. You have the rare ability of making learning so easy, I come away from class feeling like I put no effort in at all but can still recall the imperative function of the “iron cage of party discipline” in British politics a year later. I could not have produced a thesis I was truly proud of without you, and I’m certain I’ll be contacting you to produce some kind of publication in the future.

I know I talk about being from San Diego so much that it has become a running joke in my friend groups, but Davis is and always will be one of my homes. I recently learned that senior columns are called “30s” because newspapers would send pieces through telegraphs and include “-30-“ at the bottom to signify the end of a story. Not to be cliché, but I’m not so sure this is the end of a story, but perhaps a chapter. I say that, because I am determined to be the 50-year-old woman still walking around in UC Davis gear, and I know I’ll keep so many of the connections I made here for years to come.

I’m going to miss late nights spent at Shields, midnight runs to Dutch Bros, sunsets on top of the Hutchinson parking structure, sunrises on Picnic Day, Arboretum runs, day trips to Lake Tahoe, somehow always running into friends at the MU, playing lacrosse on Dairy Field, frequenting the iconic Farmers Market, studying at Philz, failing to connect to the Wi-Fi at Mishka’s and spending all my money at the Co-Op.

To all my friends who have said they will be visiting me at UCLA, please know I will be holding you to it. Go ags forever.

Sabrina Habchi is The California Aggie’s 2020-2021 campus news editor. She joined The Aggie in fall 2017 as a campus news reporter. In fall 2019, she assumed the role of copy chief and served in that position for one year before becoming the campus news editor her fourth year. She is graduating with bachelor degrees in political science and psychology and with a sociology minor.