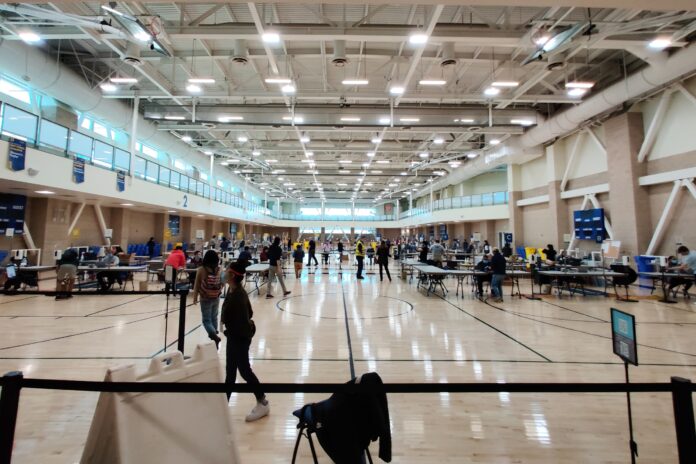 David Coil, a project scientist at the Genome Center at UC Davis and the project director of environmental monitoring for Healthy Davis Together, explained that throughout the design phase of the testing program, his team strove to come up with a system that was quick and easy. This is why UC Davis uses saliva testing instead of nasal swabs, as the latter takes longer, is more uncomfortable and costs more.

“[The testing program] had to be fast, cheap and easy,” Coil said. “We’ve seen other universities who have testing programs that have failed for [not being] all of those things, so I think it’s been really successful because we thought about that from the beginning.”

Though the layout of the ARC Testing Kiosk has shifted slightly throughout the year due to weather conditions and the reopening of the ARC for recreational use, the program remains efficient and easily accessible to students. Landry Swenson, a third-year biological sciences major and student COVID-19 testing kiosk worker, expressed that after joining the program, she was able to see the professionalism and speed of the entire testing process.

“Going into it, I already had high hopes because [UC Davis has] already been recognized by the whole country for how efficient they are and how timely they are, but seeing it in action and who’s doing it, how they’re doing it, was really awesome,” Swenson said.

Swenson became a part of the program by enrolling in the COVID-19 testing course EVE 198, part of which includes taking on shifts at the ARC Testing Kiosk. She said that the course taught her a lot about how the virus is transmitted and how the vaccines work.

In addition to the multiple stations within the kiosk and the online scheduling system, Perez believes that teamwork and great communication between the campus and the community have allowed for this level of efficiency. Swenson also said that everyone at the kiosk is welcoming and supportive.

“I think a lot of it has to do with the staff, the dedication that they put into it, meaning that they’re willing to be focused and attentive, as well as the students themselves being patient with the system,” Perez said. “It’s very cooperative and very in sync with everything.”

Perez believes that through volunteering at the kiosk, he better understood the intersectionalities needed within the program between different fields in addition to the pressures in the real world.

“I would recommend all students even if you’re not interested in the pre-health department to actually take your time and volunteer because it helps you bring a new perspective of how society interacts as well as [the] importance of communication,” Perez said.