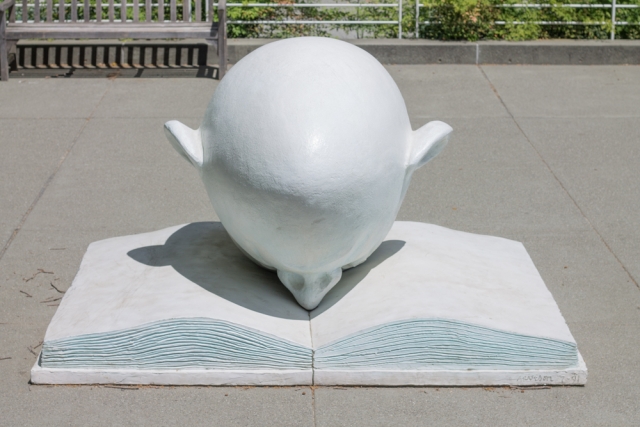 The collection of Egghead sculptures are artistic icons marking important spots on UC Davis’ campus. Out of the seven sculptures, Bookhead, in front of Peter J. Shields Library, won the popular vote with 42.2% of students naming it the best.

The Eggheads started to pop up in 1991 and have brought joy to visitors and students alike. About to enter Shields Library, Daniel Ivashin, a third-year microbiology and global disease biology double major commented on the sculptures.

“I enjoy the shared common motifs that unites the campus,” Ivashin said.

The Eggheads can be a symbol of inspiration beyond just being unique landmarks.

“I think the Eggheads are an interesting reminder that students can have their work influence the environment around them,” said Ren Allathkani, a fourth-year transfer art studio major via Discord Direct Message. “Despite how bizarre they were at first, knowing that the artist was able to get their work permanently into this space is a strong reminder to current art students that we can do the same.”

Each sculpture has features relating to its significant surroundings. Bookhead is said to give good luck when a student rubs its head before an exam.

“I haven’t participated in the ritual before, I haven’t even heard of it until now!” Allathkani said via Discord Direct Message. “It’s very precious and endearing that people do those sort of small things! I’m sure the artist would appreciate how people make use of his work, and it’s interesting how people tend to make things up. How wishful students are, that despite working so hard, they still need a little bit of magic or unseen force to grant them wishful guidance.”

The Egghead sculptures are an iconic hallmark of UC Davis. Sumit Basra, a fifth-year electrical engineering and computer engineering double major recently 3-D printed an Egghead sculpture as a graduation present for his friend. His post on Reddit gained praise and interest from fellow peers.

“I really like the eggheads,” Basra said via Reddit Direct Message, “I think they’re a really cool installation around campus. I just always found them to make walking around campus to be so much more interesting.”