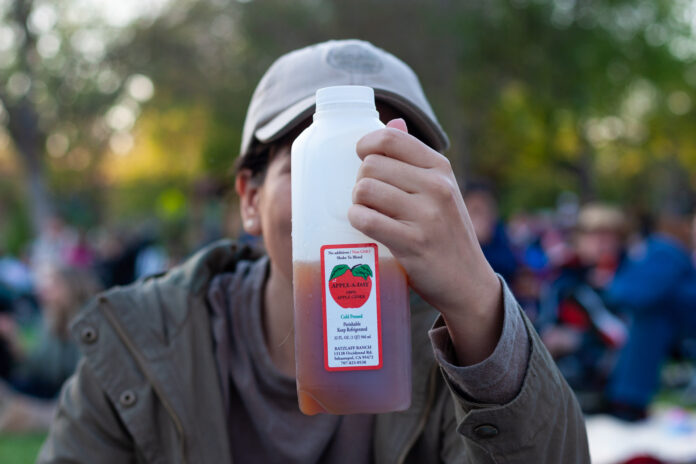 Carlene Upton, who manages the Farmers Market Apple-a-Day stand, has been with Apple-a-Day for almost 30 years.

“We’ve been here—I want to say—about 30 years, and it has been popular with the students and the residents of Davis all along,” Upton said. “Even today, a young person came back and said they had it as a kid. They bring their children back. Every time that people have had Apple-a-Day apple juice, they come back.”

The juice is made by the Apple-a-Day Ratzlaff Ranch, which is in Sebastopol, California. Apple-a-Day not only makes the juice, but it also grows its own pears and apples.

Even people who have moved out of Davis return to try the high-quality apple juice when they’re in town, according to Upton.

“Whenever they’re in town, they have to come and get an apple juice,” Upton said. “It’s almost like a requirement. I feel like it’s sort of a cult—it’s an apple juice cult. Everybody loves it and recommends it.”

Upton explained that those who have tried the Apple-a-Day apple juice recommend it to others, encouraging them to also come and try it.

“Every year, people come and say, ‘Well, we were told we had to come to the Farmers Market and get apple juice,’” Upton said. “It’s just a great product.”

Not only do returning customers love the product, but so do people who have recently moved to Davis.

“There’s new customers with students moving in every year. There’s always an influx of new students that have been told they have to come to the Farmers Market and get apple juice,” Upton said. “It seems to be an ongoing thing, and then we have regular customers who are people who live here and have lived here, and they keep coming back.”

Ultimately, the Apple-a-Day juice is a must-try item for anyone, whether they’re living in Davis or visiting.