Review: “The Menu” is a cunning social commentary with razor-sharp finesse 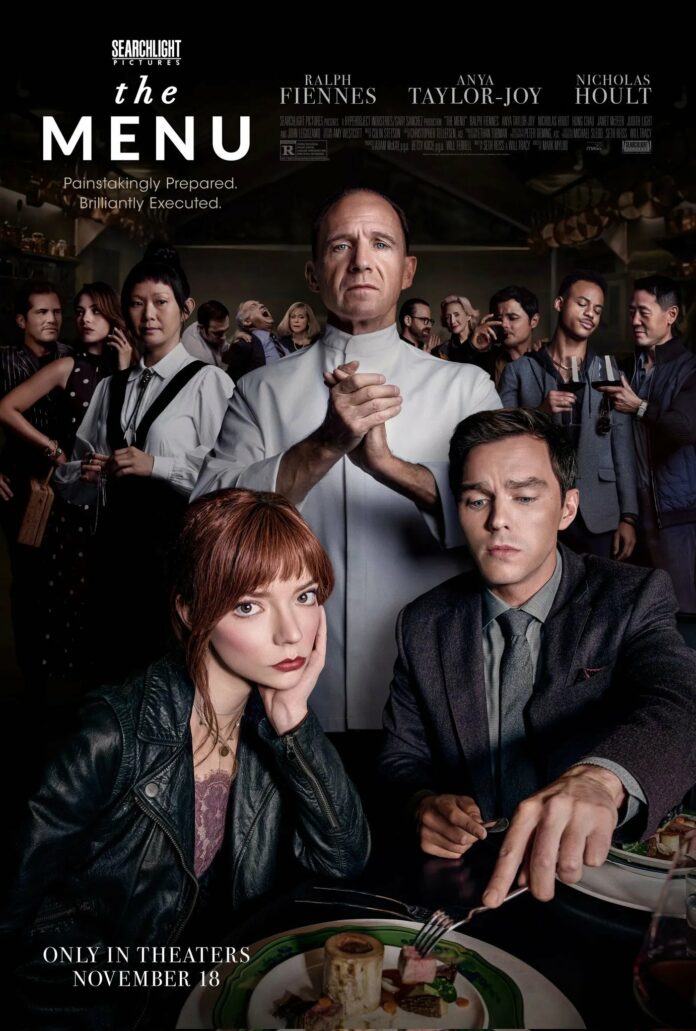 “The Menu,” starring Ralph Fiennes as an intimidating high-profile chef and Anya Taylor-Joy as his unimpressed customer, is a playfully dark commentary on class and restaurant culture.

A majority of the film takes place in a lavish restaurant on the made-up island of Hawthorn, where twelve customers are taken for an exclusive dining experience. Chef Julian Slowik, the host of this upscale event, is an acclaimed chef who takes his craft very seriously. He introduces each course on his carefully constructed menu with a speech detailing its creative significance and a piercing stare over his guests.

Whether it’s due to the dramatic visual composition of the film itself or the evidently threatening remarks made by the kitchen staff, there is a heightening sense of catastrophe and doom that blankets this movie. Yet, most of the characters are so comically pretentious that it’s hard to sympathize with their all-too-predictable fate. Among them is Tyler, a devout Julian Slowik fanatic, his unenthusiastic date Margot, a haughty food critic, a movie star and a trio of obnoxious tech bros.

Each of these guests has paid $1,200 to get a taste of Chef Slowik’s prized menu, only to become increasingly disappointed with their dining experience. From a bread plate with no bread to a dish with portions smaller than the rock it’s served on, the food itself appears as a mere decoration compared to the overly-abstract descriptions served with it.

However, the only one consistently displeased with their meal is Margot, whose skepticism and disdain for the whole experience is clear from the beginning. Her unapologetic distaste for the food, the chef and her fellow diners is the perfect ingredient to spoil an elaborate evening.

The film succeeds at creating suspenseful tension between Slowik and Margot, showing the frightening dynamic between a reputable chef and his solely unsatisfiable customer.

In addition to his stiff and meticulous demeanor, Slowik exercises complete authority in the kitchen. With a single deafening clap, his devoted team of chefs is immediately called to attention, responding with loud cries of “Yes, Chef.” This unwavering devotion becomes progressively more terrifying as Chef Slowik’s demands become increasingly unnerving.

Fiennes does an incredible job of portraying this slow-burning intensity and a chef whose love for food has become lost in artistic vision. As a result, it is enjoyable to watch Slowik unveil his disturbed and vindictive character motivations as the film progresses.

Although its over-the-top deliverance may arguably subtract from the film’s substance, its purpose is to poke fun at snobby upper-class foodies, which it does effectively. Just like the menu dishes that it portrays, “The Menu” proves that a movie doesn’t have to come packaged with profound insight in order to satisfy its audience.