Hawkins for the win 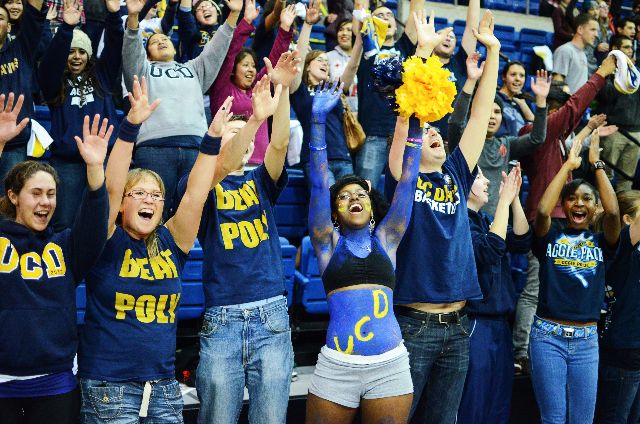 As the first half of Thursday’s game against Cal Poly drew to a close, most Aggie fans got up and left. The first 20 minutes of play certainly justified their decision to leave. UC Davis’ offense stalled and the team fell behind by 18 points early in the game.

However, a quick timeout and a completely new schematic started to change the direction of the scoreboard. The Aggies stopped trying to find the outside jump shots and started attacking the driving lanes to the hoop. Sophomores J.T. Adenrele and Corey Hawkins worked to cut the Aggies deficit to six points at the end of the half.

Head coach Jim Les noted the sloppy start but he credited the squad that closed the half.

“That group, they really got the energy going and it gave us something to build on in the second half,” Les said.

UC Davis came out of the locker room trailing 31-37 and they simply exploded at the start of the second half. Junior Ryan Sypkens led the charge with a gorgeous 3-pointer that swished in from the left side. The Aggies went on to score eight of the next nine points and Adenrele tied it up with 17:25 left in the game.

Once tied, the game became a grinding back and forth battle that kept fans on their seats with 11 lead changes to close the game. As the final minutes drew near, the Aggies started to stumble. This season has been plagued with late game disappointments and with 4:01 remaining Cal Poly started to pull away.

Head coach Jim Les called a timeout to try and focus his team.

“We’ve struggled with closing in the final minutes. It’s like we’re right at the door and we’re knocking and we needed to smash it in,” he said.

They came out of the timeout and turned the ball over to the Mustangs. Fortunately, Cal Poly was unable to convert the points and they gifted the Aggies with some free throws when they fouled senior Ryan Howley on the rebound.

UC Davis converted one of the free throws, cutting the lead to four and then Sypkens sank another three-pointer to cut the margin to one point. The Aggies managed to reclaim a three point advantage with 20 seconds on the clock and it seemed like UC Davis was coming home with a win.

That is, until Hawkins fouled a Mustang while he was attempting a three-point shot of his own. Cal Poly went on to sink all three of their free throws which tied the score at 67 apiece with nine seconds left on the clock and fans prepared themselves for an overtime finish

UC Davis used the remaining time to inbound the ball to Hawkins who charged it down the court, kicked it out to senior Paolo Mancasola who attempted a 3-pointer that fell short and conveniently landed in the hands of Hawkins with .2 seconds left on the clock. Hawkins was falling backwards as he lobbed it up and landed just in time to watch it swish through the hoop for the win.

The Pavilion exploded as players, fans and coaches all thoroughly enjoyed a communal celebration session. It was a deserved moment for this team which has fought hard this season and they were certainly happy to reap the rewards.

Hawkins gave all the credit to his teammates in a post game interview.

“Without those guys, I don’t make that shot. All the credit goes to them,” he said.

Coach Les had plenty of praise for his team as well as for Hawkins’ strong performance.

“The best thing about Corey is that he never stops playing. He also has a gift for making those off-balance shots. You can’t teach that,” Les said. “Those guys, they deserved this. I like this. I could get used to this!”

However, Thursday’s victory was short lived. UC Santa Barbara came to town on Saturday night and their senior Alan Williams was simply unstoppable. He scored 28 of his team’s 66 points and effectively neutralized the production of the Aggies’ center men.

UC Davis did make some halftime adjustments and had a much better approach to finish the game but the offense was unable to close the hole the team had fallen into earlier in the game.

“We let them fall into a rhythm was too early and then we were rushed on offense,” Les said.

The 59-66 loss to UCSB drops the Aggies to 1-3 in Big West conference play. They head out on a road trip next week, facing Cal State Northridge and Hawai’i. Perhaps the loss will give them the hunger and the drive to earn some road victories to help right the ship.