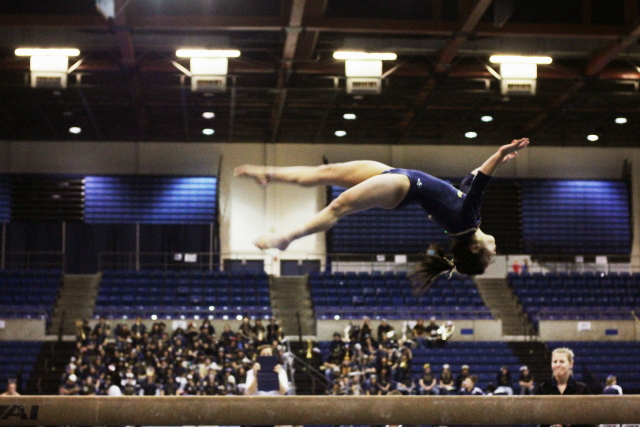 The UC Davis women’s gymnastics team put together a strong team performance to place third at the Power of Pink meet this past weekend.

The Aggies’ overall score of 194.675 was the second highest in the program’s history, missing the school record of 194.7 by a microscopic .025 points.

The Aggies got strong contributions from senior Katie Yamamura, who scored a 38.8 in the all-around, her second highest this season. Yamamura’s 9.825 on the uneven parallel bars was the highest UC Davis score.

The UC Davis gymnast who also helped the Aggies’ cause was junior Anna Shumaker, whose vault and balance beam scores of 9.8 and 9.85, respectively, got her fifth and third place in each event.

Shumaker placed right behind Yamamura in the all-around, putting together a neat 38.625 for sixth place overall.

Senior Michelle Ho recorded a 9.775 on her bars event and posted an identical score on the floor before closing her competition with a 9.725 on the beam.

Sophomore Tiana Montell also added to UC Davis’ point total by adding two 9.725 marks on the vault and bars, then scored a 9.675 on beam.

The Bruins scored a 196.95 to place first while the Huskies placed one point behind at 195.95 in second place. Sacramento State took fourth at Pauley Pavilion with a 193.925 score that rounded out the meet in front of 4,234 fans.

UC Davis will have its next competition at Seattle Pacific on Friday at 7 p.m. before coming back to California to compete with Sacramento State once again the following week.