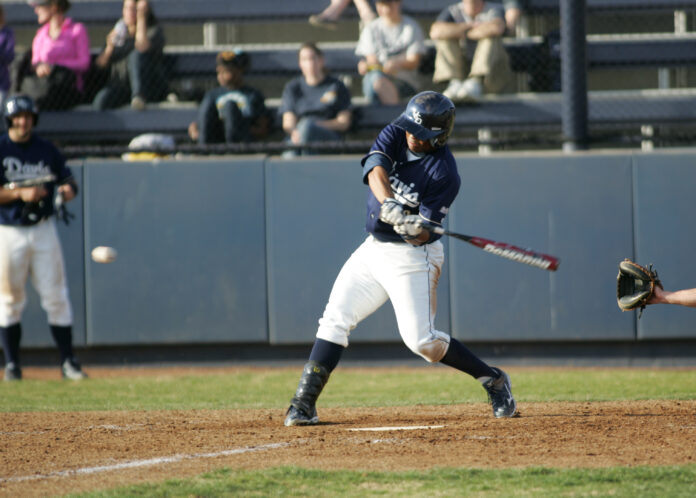 Teams: UC Davis at UC Irvine
Records: Aggies, 15-22 (3-9) ; Anteaters, 25-11 (7-5)
Where: Cicerone Field — Irvine, Calif.
When: Friday at 6:30 p.m.; Saturday at 1 p.m.; Sunday at 1 p.m.
Who to Watch: Junior second baseman Steven Patterson has been killing the baseball as of late. In fact, in the game against UC Riverside on Picnic Day, Patterson drilled a three-run homer to seal the game for the Aggies. He is hitting .338 with two home runs and 26 RBI, after the series against the Highlanders. Patterson’s solid hitting is something which the UC Davis batting order has needed.

Patterson has a seven-game hitting streak that has boosted his average from .286 to a blistering .338. He has also shown some patience at the plate, drawing nine walks this season. The result of his hot hitting and ability to draw walks is a .396 on-base percentage. His ability to get on base and drive in runs has been a huge catalyst for the recent resurgence in the Aggies’ offense.

Patterson’s hot bat is not the only thing which he provides to the team, as he also turned a nice double play in the top of the ninth of the Picnic Day game against the Highlanders. However, Patterson has been prone to making the occasional error. After the series against UC Riverside, he has 10 errors on the season, which is second highest on the team. Despite the occasional lapse in judgment, Patterson’s bat and ability to make game-changing plays have been key to the Aggies’ winning baseball performances.

Did you know? Senior Paul Politi’s solid season has etched his name into the UC Davis record books. He now is ranked in the top-10 all-time in hits and doubles. Politi is seventh in hits with 209 hits over his career and he is ninth all-time with 40 doubles as an Aggie, only 13 doubles away from breaking the record. Furthermore, he is also fourth all-time in total at-bats over his baseball career at UC Davis.

He is batting .276 with five home runs and 27 RBI. Politi is first on the team with home runs and RBI. He has been the constant-power threat for the lineup and as such continues to be one of the main batters who drive in runs.

Preview: What a difference a week can make. The Aggies were struggling mightily heading into the weekday game against Nevada. Having lost seven in a row and eight out of the last ten games, UC Davis was struggling.

However, with a 9-2 win against the Wolfpack and a series sweep against the Highlanders, the Aggies seem to be rejuvenated and ready to play good baseball. The Aggies capped off a fantastic week with a 19-8 annihilation of UC Riverside.

As UC Davis travels to Irvine to face the Anteaters, the Aggies hope to continue the hot hitting. This could be tough, as UC Irvine has a solid pitching staff with a team ERA of 2.74 and a team record of 25-11. The Anteaters are led by junior Andrew Morales, who is 9-0 with a 1.34 ERA.

UC Davis will hope that Patterson and Politi, both critical in the recent Aggie resurgence, will continue to hit. In the weekend sweep against Riverside, Patterson hit 6-14 with seven runs scored, two homers and nine RBI. Politi hit 4-5 with four RBI, four runs scored and two home runs in the last game against the Highlanders. With this dynamic duo swinging their bats well, the Aggies seem to have regained some confidence in their ability to win games.

The one weakness the Aggies have shown during this win streak has been their pitching. They have been unable to pitch well consistently. This might be a huge problem against Irvine, as the Anteaters have a tough batting order.

The Anteaters are led by two of the best hitters in the conference, sophomores Connor Spencer and Taylor Sparks. Spencer, the on-base extraordinaire, is hitting .385 and has an on-base percentage of .469. Sparks is the power-hitting slugger of their lineup with a .342 average, six home runs and 31 RBI.

Hopefully, with their newfound sense of confidence, the Aggies can pitch well enough to allow their potent offense to shine.