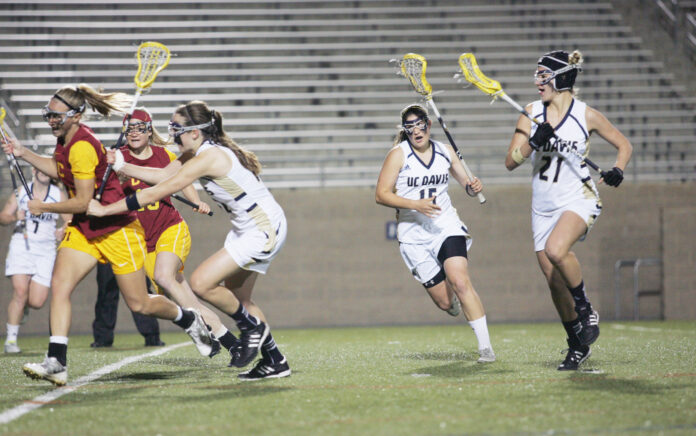 There’s an age-old saying in sports: it is not how you start, but how you finish. The UC Davis women’s lacrosse team, although finishing with a 6-9 record overall and going 3-5 in conference play, was able to finish the season out strong.

“This was a transition year for us with a new coaching staff. It was our job to try and find a way to harness the talent of our five seniors and use the energetic underclassmen into a system that could work for us,” Henwood said. “Elaine did a phenomenal job, turning lacrosse from a club program to a Division II program and then to a Division I program. I’m not here to be mediocre, but for us to be the best in the West.”

Although the Aggies lost their season debut to the third-ranked team in the nation, Florida, they claimed their first win of the 2012-13 campaign with an 18-4 shellacking against Stetson University. In the victory, Aggie seniors Stephanie Guercio, Elizabeth Datino and captain Hannah Mirza each scored three goals.

The Aggies kicked off their Mountain Pacific Sports Federation (MPSF) conference play against St. Mary’s. In a close contest that saw four lead changes and Datino scoring five goals, St. Mary’s scored the fateful 16th goal in an overtime thriller. Although defeated, Henwood and the team learned a valuable lesson.

A near upset against the 20th-ranked Denver Pioneers may have been the turning point for the team. With three unanswered Denver goals, the Pioneers held a 9-8 lead. The Aggies fought hard, eventually equalizing at 11-11, but key defensive steals from Denver ensured their 13-11 victory.

“In the big picture, it shows a lot of growth. The team is getting better every single outing. But we’re not satisfied with the outcome either,” Henwood said. “We’re disappointed that we had them for the entire game and let it slip out of our fingers. All of those little things, which come down to staying focused and sticking to our game plan, came back to bite us.”

The Aggies would go on to win their last three out of four conference games with victories over Fresno State and San Diego State. However, the 15-14 overtime stunner against Stanford was one of the most memorable games of the year.

“We had nothing to lose,” Mirza said. “Not making the MPSF playoffs, we viewed it as our championship game. We wanted to fight until the end.”

Tied 13-13 going into overtime, the Cardinals drew first blood with an early goal, but a late goal by Aggie sophomore Meghan Jordan leveled the score 14-14. With five seconds remaining in overtime, Mirza fired a shot out wide in what appeared to have sent the game into sudden death. But Aggie senior Anna Geissbuhler won the ground ball and flipped it to Datino, who ran around the side of the net to pop the game-winner. UC Davis’ victory over Stanford ended a streak of 19 straight losses in the series and also represented the first time the Aggies have ever defeated a team ranked in the top 20 of Division I.

“We played to the level we could have played all year. It was a moment of extreme pride for me to see them finally be able to play at that level,” Henwood said. “The best part about it was that Stanford didn’t play a bad game. We led the whole game. We showed the conference that UC Davis is here to stay.”

Although the Aggie lacrosse team will be losing five seniors, which include Datino and Mirza, who were both respectively named 2013 All-MPSF, Henwood has recruited six incoming freshman for the fall as well as now seasoned veterans such as Mary Doyle, a first-year undeclared major who garnered second team honors MPSF, as well as another dedicated group of seniors. The future is indeed promising.

SHAUN MONCADA can be reached at sports@theaggie.org.