Walking a mile in her feet 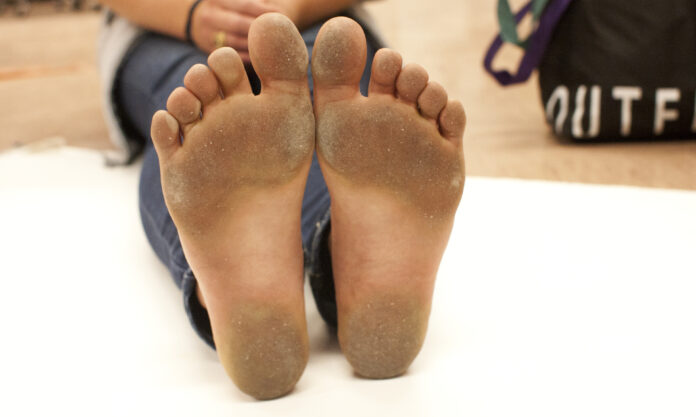 Elena Piotter may appear to be just another first-year international relations major, but if you look closely, you can notice one noteworthy feature about her, and it happens to be her feet.

Piotter lives her life without the comforts and benefits of shoes, and she does not regret it in the slightest.

“To be completely honest, my number one reason for not wearing shoes is that it is more comfortable,” Piotter said.

Piotter’s unusual journey started in high school when she participated in a national campaign for Toms Shoes called One Day without Shoes. The annual event hopes to raise awareness and funds for children’s health and education. Piotter hoped to join the thousands around the globe hoping to stand on this important issue.

When she arrived at school free of footwear, however, a campus security guard told her to put on shoes in compliance with state law.

“After that, I had always wanted to go shoeless full time, so when I came to Davis, I thought it would be such a large institution that I could just do it and it wouldn’t be noticed by anyone,” Piotter said.

In an email interview, assistant director for Student Judicial Affairs Colette Duño confirmed that there is no student conduct policy specific to wearing shoes on campus. This opens the door for Piotter and many other students to express themselves as they see fit.

Her decision hasn’t come without resistance, however. Every time she enters the Cuarto Dining Commons, Piotter must join the remainder of society and put on shoes.

Branden Petitt, the director of the Office of Student Development, ensures that the dining policy is not meant to stifle creativity or freedom of expression.

“We use the policy to promote public safety and to maintain a certain level of decorum. We are very concerned that guests could possibly step on objects causing injury if stepped on by someone who is barefoot,” Petitt said.

That didn’t stop Piotter earlier this year, however.

“I was told it was a safety hazard and it wasn’t sanitary. I’ve gotten pretty close to getting written up,” she said.

Nonetheless, other than a few incidents with Student Housing, she has experienced no problems from the campus. And Piotter assures any naysayers that the practice is completely safe.

“You develop a sixth sense for seeing glass — I’ve only stepped in glass twice. You just adapt. I walk along the white lines on pavement and try not to get off my bike until I am as close as I can get to my destination,” Piotter said.

Other concerns surrounding her decision stem from the possible sanitary complications.

“A lot of people say it’s unsanitary, but if you think about it, you go into stores and touch things with your hands and pick up germs. But your feet don’t actually touch anything … it’s not like you are touching your face with your feet,” she said.

Piotter also offers her advice for those considering her lifestyle. Whatever your motivation for trying it out, this unusual lifestyle can offer adventure, an ecological alternative or even a sense of rebellion to an otherwise humdrum life.

MARK BURNSIDE can be reached at features@theaggie.org.