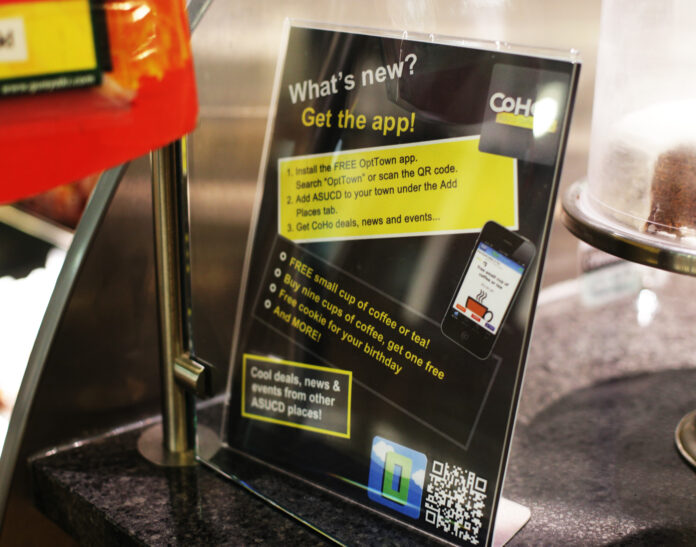 The ASUCD Coffee House (CoHo) is brewing more than just coffee, with buzz of a new partnership between the historic student-run eating facility a new mobile application.

OptTown, a coupon app that keeps users and small businesses connected, has joined with CoHo and its extensions, the CoHo-To-Go and the CoHo South Cafe.

It allows users to create “towns” of their favorite restaurants and shops to stay updated on news and specials. Without the heavy task of having to create their own mobile apps, OptTown provides small businesses a platform for networking, loyalty programs, consumer feedback and more.

The deal between ASUCD and the two-year-old company was introduced early this year. President, CEO, co-founder and UC Davis alumnus, Tom Arthur reached out to the University in hopes of testing out the campus as the app’s trial run.

Discussion began around spring quarter regarding how this new relationship would affect the Coffee House.

“We thought it’d be really cool to have a loyalty program, save some printing money, and allow students a little more convenience,” said ASUCD President Carly Sandstrom.

ASUCD worked with their businesses to get on board and received $2,000 for the awards endowment fund which goes toward ASUCD scholarships.

As a frequent OptTown user, Sandstrom defends the CoHo’s partnership with a private company.

“From my perspective, yes, we are partnering up with a private company but at the same time, it’s just like using Facebook or Twitter. It’s allowed our businesses to get onto something to track how many people are using their services and how many people are following them,” Sandstrom said.

The app is free for all users, but businesses must pay a fee based on the number of followers they acquire quarterly. The price of having less than a thousand followers amounts to about $25.

“We feel as though it will encourage campus community members to come and check out the Coffee House and it is a vehicle by which we can send messages to our existing customer base about deals, promotions, menu additions and other events,” said Darin Schluep, foodservice director of the Associated Students Dining Services, in an email interview.

CoHo barista and fourth-year biochemistry major Tommy Fowler utilizes the app with friends to view restaurant deals and sees it in action on the job. The CoHo rewards its OptTown users for every purchase with digital stamp cards on customers’ smartphones.

“I think it’s a pretty nifty app. For here, we’re using it as a punch card and you get a free coffee when you first download it and on your birthday you get a free cookie also. It’s pretty handy especially if you have a smartphone so you don’t have to keep whipping out that paper card,” Fowler said.

The Experimental College offers a discounted class for first-timers, and many of the businesses downtown invite users to enjoy benefits on their birthdays, such as a free yoga class at Akasha Yoga.

Although the app is new to campus, students already predict a successful outcome.

“Davis is a college town and all students, including myself, are always looking for good deals around the area. OptTown only makes it more convenient for us to take advantage of these offers and I can’t imagine why the app wouldn’t be widely used as it becomes more well-known,” said fourth-year aerospace engineer Troy Chuang.

NICOLE YI can be reached at campus@theaggie.org.