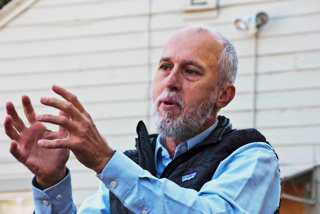 In June 2014, the City of Davis will vote to elect new city council members. Some current members plan to run for reelection, others hope to be elected to district assembly seats and new candidates will run for the first time.

Davis City Council is made up of five seats, two of which will become available in 2014. Elections for the city council occur every two years, and the mayor is chosen out of the group of elected council members. The mayor pro-tempore is intended to take the mayor’s place when his/her term ends.

A couple of weeks ago, Robb Davis announced officially that he will be running for a city council seat.

The other two current members of city council are Lucas Frerichs and Brett Lee, both of whose terms will end in 2016.

“[I’m focusing] on transportation issues, such as safe cycling, as well as homelessness and addiction,” Davis said.

Moving forward, Davis believes that it is especially important to focus on long term structural problems in the City of Davis and to balance its revenue and expenditures.

Davis is aware of the importance that the City of Davis has as an agricultural system as well.

According to Davis, the city needs to be conscientious of how we develop our farmland and make sure to take care of the resources.

Rochelle Swanson, a current city council member, plans to run for another term on city council because she feels that there is still more work to be done.

“I believe there is still a lot of hard work to do to to preserve and strengthen our quality of life,” Swanson said in an email.

Swanson also recognizes the agricultural assets of the City of Davis and wants to use them to their furthest abilities.

“We have a responsibility to be a leader in trendsetting how communities feed themselves,” Swanson said. “We must focus on utilizing these assets.”

Current City of Davis mayor, Joe Krovoza, will not be running for reelection when his term expires in June 2014. Instead, Krovoza will be running for a seat in the California State Assembly.

If elected, Krovoza hopes to bring the high quality science that has come out of UC Davis into policy making, as well as to bring increased availability of financial aid to students.

According to Krovoza, a great “Renaissance” between the City of Davis and the University has occurred during his tenure, something he hopes will be maintained in the future.

“Students are a huge part of the community, and the city and University needs to work together,” Krovoza said.

Krovoza cites especially the relationships that have been built through Davis Roots, a non-profit organization in the City of Davis that is geared to get university-born entrepreneurial ideas off of the ground.

Running for the same assembly seat as Krovoza is Dan Wolk, the current mayor pro-tempore.

Wolk also believes in the importance of assimilating UC Davis students and graduates into the City of Davis to help it grow.

“[We need] ways of creating jobs in Davis to keep graduates in town once they graduate,” Wolk said. “Students are a critical component of our community.”

Wolk is aware of some of the problems with the city that current UC Davis students face as well.

Wolk would like to see more student involvement in politics in the City of Davis, which he believes is crucial for maintaining the positive relationship that students have with the residents of the City of Davis.

“I plan to work hard to reach out to students and encourage them to engage more in the city’s politics,” Wolk said.