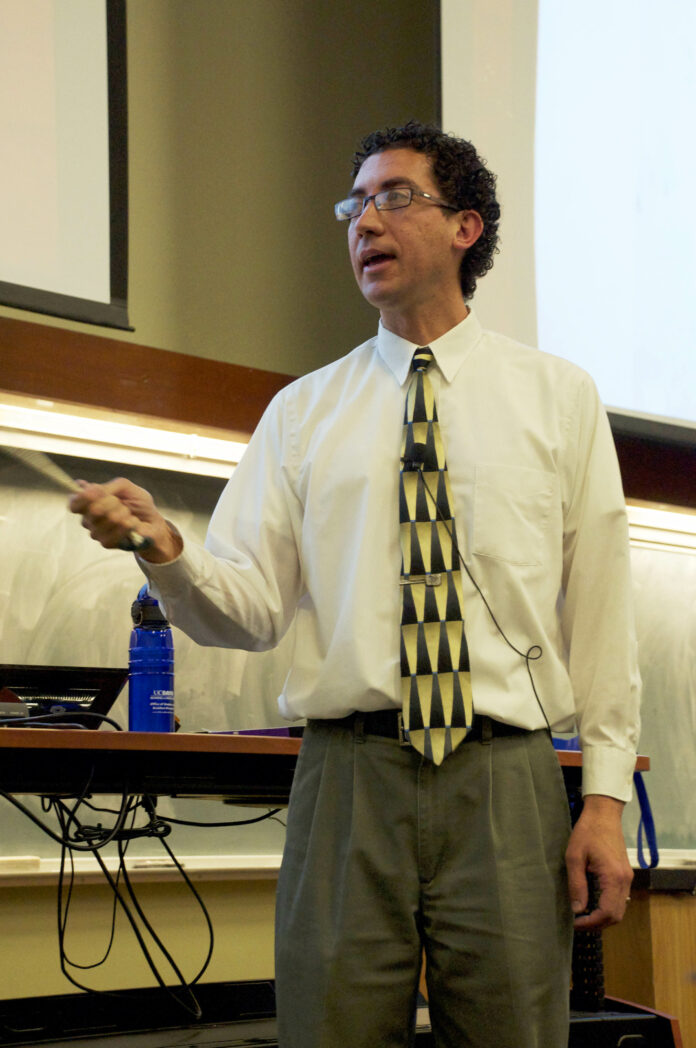 Basic chemistry is the undisputable right of passage for each young science major at the University of California. In what is effectively a three-quarter crash course on all things chemistry-related, the UC Davis Chemistry 2 series serves as an introduction to basic chemical intuition; the series tests the wit and persistence of many young science majors, and eventually beckons them into upper-division coursework.

Dr. Bryan Enderle is one of the few professors in the Chemistry 2 series who, for some students, has helped to improve or transform their perspective on the subject.

At 39, Bryan Enderle is one of the youngest lecturers in the UC Davis Chemistry Department. He received his bachelor’s degree in chemical and petroleum engineering from UC Berkeley in 1997, and his doctorate in chemical engineering from UC Davis in 2002. He has been on board as an affiliated faculty member at UC Davis ever since. Dr. Enderle’s past endeavors as a UC Davis PhD student have helped him to feel connected with students — he has been part of the Aggie community for over 11 years now, as both a student and educator.

Even from an early age, Dr. Enderle appreciated the fantastical properties of atoms. He’s currently making it his life’s work to simplify the intricacies of the chemical world to young scientific minds.

“I enjoy the abstract, intuitive nature of chemistry, ‘What is the chemical or atom going to do next based on its chemical environment?’ These concepts have been quite enjoyable for me since high school. The subject just worked for my brain; it’s how I’m wired,” Enderle said.

Dr. Enderle is a lecture-only professor, which is a unique position to hold in a subject founded upon constant research and development. While many university professors divide their time between working in and/or administrating laboratories and leading courses, Dr. Enderle made the decision early on in his career to focus primarily on the education of his students.

“Most instructors teach a couple classes a year and also partake in research. You have to publish, you have to get grants and all of this is very time consuming. For some research professors, by the time they get to a class, it’s not necessarily the first priority … this all depends on the person of course,” Enderle said. “For myself I enjoyed research at one point and I got what I wanted from it, but then I decided to focus fully on teaching. I realized that I enjoyed teaching a lot, and now that’s what I spend most of my time doing.”

Dr. Enderle employs an underlying philosophy that if students can connect with him they’ll be more engaged in the subject matter. He makes an effort to reach out to students and chemistry enthusiasts through the UC Davis Chem-Wiki page videos, chemistry review sessions (which are often at capacity before exams), office hours and his chemistry-related YouTube channel, which currently has over 2.3 million views. Dr. Enderle also mentioned that he spends a generous amount of time responding to student emails in regard to chemistry-related questions.

“People don’t have to necessarily like chemistry, but I know they need to get through my class to proceed in their education … if they can see some value in it by the end of my course and feel more prepared for future classes, then I’ve succeeded,” he said.

In 2012, he was the overall campus winner of the ASUCD Excellence in Education Award (as well as the overall winner for the College of Letters and Science), recipient of the Interfraternity Council Teacher Appreciation Award and an Honored Faculty at the Prytanean Honor Society.

In the time he spends outside of teaching, Dr.Enderle has dedicated himself to exploring the overlap of science and religion. In a recent TEDxUC Davis talk entitled “Science vs. God,” he was the featured speaker in the discussion, and was able to share his views during an interview.

“I am both a science professor and a man of faith. I have no need to be one or the other when I believe that both can coexist. I love to explore their overlap and parallel streams of thought. It is a passion of mine,” he said.

When Dr. Enderle isn’t delving into the overlap of science and God, preparing his lectures, replying to emails, upholding his post at undergraduate academic advising or filming “e-walking” extravaganzas around Davis (these comedic videos are also on his YouTube channel), Dr. Enderle spends his time with his wife and three-and-a-half year old son. Enderle is a frequenter of Central Park, the Davis Farmers Market and family/friend board game nights and he especially enjoys reality TV shows.

Dr. Enderle has some closing remarks for his students.

“I would tell students to engage in all parts of their lives. Most students have a big chunk of their life consumed by academics, especially in the sciences … Pay attention to the other parts of your life: exercise, sleep, your emotions, spirituality, if that’s your thing. So many of these things are important to make a well-rounded person,” Enderle said.