This week in sports 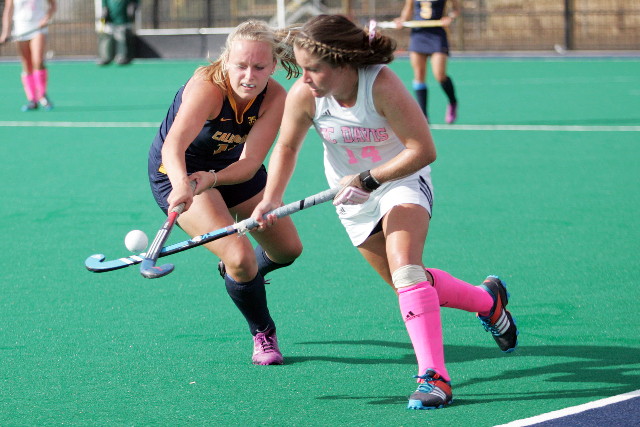 UC Davis vs. No. 2 Montana State

On Oct. 11, UC Davis football took on No. 2 Montana State in a homecoming showdown

that saw a very mixed performance by the Aggies. On the positive side, the Aggie offense

looked outstanding for the first time this season against a Division I opponent. Sophomore

quarterback Ben Scott, making his debut as a starter, threw for 379 yards and four touchdowns

back Gabe Manzanares returned to his last-season form, rushing for 142 yards.

On the other side of the ball, the UC Davis defense struggled throughout the day,

and they managed to score on all but two possessions in the game.

Don’t miss The California Aggie’s in-depth coverage of the game.

After a tough first day in which the Aggies finished in sixth place, sophomore Paige Lee

Davis to third place overall. Lewis and Lee, who tied for fourth place individually, finished 2-over

except University of Washington and Stanford.

The UC Davis women’s golf team will play at their last tournament of the fall season, the

Stanford Intercollegiate Tournament, from Oct. 17 to 19. For more coverage on the women’s

golf team, check out The Aggie’s highlight of the team.

UC Davis vs. University of Pacific

Between Oct. 6 and 12, UC Davis took on their final two home opponents of the season.

Against Cal, the Aggies were handily defeated as they were only able to score one goal in the

game. Cal jumped out to a 3-0 lead at the end of the first half thanks in part to nine shot

attempts. While UC Davis was able to outshoot their opponents in the second half, only one of

the attempts found the back of the net.

In their final home match of the year, the Aggies defeated the University of Pacific.

the UC Davis campus, and freshman goalie Briana Sooy was able to keep University of Pacific

off of the scoreboard in the second half to pull out a victory.

as their undefeated streak was ended by UC Irvine. Against the No. 11 Anteaters, the Aggies

With their goal of finishing the season undefeated squashed, UC Davis completed its

captain Ramon Martin Del Campo leave in the 35th minute due to a red card, but they managed

to hold their opponent scoreless for the entire game.

contributed both goals for the Aggies, scoring in the 25th and 60th minutes of the match.

After the game, coach Twila Kaufman said, “Haley did a great job validating the hard

work of her teammates; that’s what a goal scorer does.” The win broke a streak of nine games

The Aggies were able to repeat their offensive success against the UCSB Gauchos,

scoring two goals including one by junior forward Sienna Drizin, to force overtime. Still, they fell

in double overtime as the Gauchos scored a game-winner with just 19 seconds left in overtime.

Battle in the Bay

Over the weekend of Oct. 10 to 12, the UC Davis men’s tennis team split up to take on

won the Flight B consolation side.

Adamson and junior Adam Levie fell in the final of the main draw after defeating several higher-
ranked opponents.

After two games away from home, UC Davis women’s volleyball returned to the Pavilion

to take on UC Riverside. In that match, the Aggies swept the Highlanders behind strong play

from sophomores Kendall Walbrecht and Allie Wegener. The Aggies fell behind early in each of

the sets before finishing strong. The team also had 12 total blocks, which added to their Big

The Aggies have now won three straight games and are just one win away from a .500

Men’s water polo played five games in three days between Oct. 10 and 12, including

four against ranked opponents, and managed to win just one. The first game against Cal Baptist

saw the Aggies tied at nine goals each at the end of regulation, only to lose in overtime. The

next four games, all against ranked opponents, were a part of the SoCal Invitational

The first two games of the tournament, against No. 5 Long Beach State and No. 18

Whittier, were not very close. UC Davis lost to Long Beach State by a margin of three goals

before beating Whittier, who they have already defeated this season, 14-10.

The second day of the tournament saw two much closer games, each one-point losses

by the Aggies. UC Davis trailed for the entirety of the game against No. 10 Princeton and saw a

comeback bid toppled after a 3-0 run. Against No. 12 Pepperdine, the Aggies held a mild