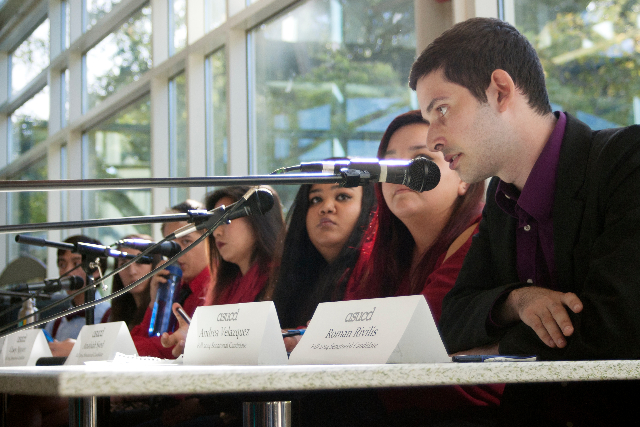 “We have 700+ registered student organizations at UC Davis, but we don’t have ASUCD infrastructure to oversee them,” Lee said. “Student government should be about student services. I saw a need and I am trying to fill it.” “For me, being from a community that has been underrepresented in the past has been important,” Syed said. “A big thing for me is being accessible for students in general, not just my community.

In addition to being heavily involved in student organizations relating to the Middle East/South Asian communities on-campus, Syed also serves in ASUCD as a Commissioner for External Affairs Commission and as a member of Senator Azka Fayyaz’s executive staff.

“There is a disconnect between ASUCD and students on campus,” Syed said. “I want to make sure I really represent the student voice, not just one community over another. If I have the opportunity to take student voices and represent them fairly, then why not?” As a result of her early involvement with the non-profit UC Davis student organization M.E.Ch.A, fourth-year political science and psychology double major Andrea Velazquez has demonstrated her leadership interest in community-based work.

As a senatorial candidate with the SMART slate, Velazquez’s platforms include promoting mental health awareness on-campus and establishing transparency with federal grants.

“I am not here just to represent myself,” Velazquez said. “I want to make sure I am voting for everyone, not just my own self interests.”

Although she was originally called upon to run for senate, Velazquez said she herself finds the position to be very important and hopes she can work towards her platforms if elected.

“I want to get my hands on how its all working and moving and what ASUCD is about,” Velazquez said. “I want to make sure to work on my platforms, but also help others with their platforms, especially the ones that I am aligned to.” “I was so excited to go to Davis, so I researched ASUCD. I applied to be on Outreach Assembly because of my past experiences being involved,” Chang said. “I have had a great time being involved, meeting people and learning about UC Davis.”

As a member of Outreach Assembly, Chang has helped coordinate events including first-year orientation and ASUCD Harv-Fest. This quarter, Chang’s platforms include expanding tutoring resources and redesigning resources available to transfer students.

“I have always been involved and served students. I want to be a teacher and help students in general,” Chang said. “I want to serve the students and be a voice, especially for transfer students because we don’t currently have that representation at the ASUCD Senate table.” For third-year Asian American studies and community and regional development double major Casey Nguyen, running as a SMART candidate for ASUCD Senate was an opportunity to bring her passion for student advocacy to the next level.

“I really enjoy all the things senators do in Senate meetings and outside of them,” Nguyen said. “There are a lot of privileges that ASUCD senators are afforded that not all students are given. I think that using those benefits to the student’s good is something I can do as an ASUCD Senator.”

In addition to working at the Student Recruitment and Retention Center on-campus, Nguyen has interned for current ASUCD Senator Robyn Huey and currently serves as the Vice Chair of the Ethnic and Cultural Affairs Commission.

“If elected, I want to make sure that students know that we are available to them. Senate meetings aren’t just scary place where people yell at each other, but are a place where we get things done,” Nguyen said. “As a senate table we represent the general UC Davis community.” For third-year economics and international relations double major Reem Fatayerji, running as an independent senatorial candidate is the best and most transparent way to represent all student interests.

Fatayerji’s on-campus involvement includes Greek life and her platforms concentrate on strengthening the bonds between student organizations and ASUCD, expanding peer tutoring opportunities and adding outlets to the CoHo and library.

“I chose my platforms based on what I thought would be the most applicable,” Fatayerji said. “I realized that most of my platforms applied to most students.” The decision to run for ASUCD Senate was easy to make for fourth-year political science and economics double major Roman Rivilis, given his four-year long involvement with the UC Davis student government association.

“ASUCD has been a definite part of my college experience,” said Rivilis, who has served as an intern for former ASUCD Senator Justin Goss and commissioner for the Internal Affairs Commission. “As an elected official, I want to be a resource to the rest of ASUCD with historical perspective with what has not worked in the past and what will be successful in the future.”

Rivilis’s platforms include starting a Greek Hunger Initiative to link the Greek community with the on-campus Pantry, establishing a peer advising program within the university Financial Aid office and creating a testing center for students with disabilities.

“I am running because I don’t feel the administration is being responsive to student concerns,” Rivilis said. “I want my term to be about reaching out to as many students as possible.”

How to spend a day in Davis