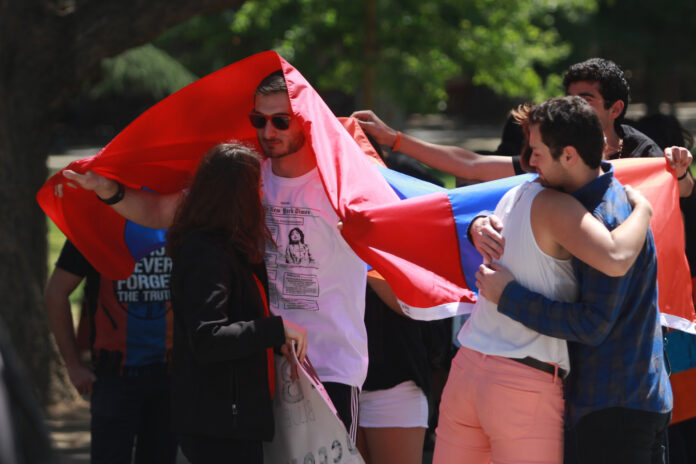 Divestment resolution to be introduced next week

Nearly 50 people joined a “die-in” staged by the UC Davis chapter of the Armenian Students’ Association (ASA) last Friday on the Quad to commemorate the centennial anniversary of the Armenian Genocide of 1915.

ASA members covered the cement plaza north of the Quad with posters and books conspicuously attesting to the genocide. As ASA President Tamar Tatoian explained, the history about the Armenian Genocide is complex and politically quarrelsome.

After joining Word War I as a German ally, the Ottoman Empire began to battle Russian forces in the Caucuses, an area where a large population of Ottoman Armenians resided. As the Ottoman forces proved unsuccessful, the ruling Muslim Turks began to blame the Christian Armenians, whom they accused of aiding the Christian Russians. (Some Armenian nationalists had cooperated with the Russians.)

A consensus among historians indicates the Ottoman leadership began to systematically portray Armenians as a threat to the state at that time. A new law empowered authorities to deport anyone they thought threatening.

On April 24, 1915, hundreds of Armenian intellectuals were arrested and executed. Many Armenians memorialize this date as the beginning of the genocide. Witness accounts and population data suggest that approximately 1.5 million Armenians were killed in executions, death marches and concentration camps over the following years.

The Republic of Turkey refuses to recognize the mass killing of Armenians between 1915 and 1917 as a genocide, denying that the Ottoman Turks made any organized attempt to eliminate the Armenians. They instead regard them as casualties of a chaotic war. Turkey’s denial has lead allies such as the United States to note the tragedy in terms just short of genocide.

ASA’s commemoration was just one of many that took place across the world this past week. Tatoian said that similar commemorations will reappear on campus until Armenians are vindicated by the Turkish government.

“It’s extremely emotional for all of us,” Tatoian said. “We all grew up with this in our hearts. We’ve been going to these genocide commemorations since we were babies—before we could consciously understand what was going on.”

“You feel sorry for all the things that happened 100 years ago,” Tatari said. “It’s kind of a feeling of responsibility, I guess, for me, as a citizen of the Turkish Republic.”

Tatari has attended several genocide commemorations in Turkey’s capital of Istanbul. Although fully acknowledging the many Turks who will not refer to the deaths as a genocide, Tatari expressed concern about strangers to the issue labeling all Turks as genocide deniers.

“There are many Turkish historians and activists, and many people in Turkey, who really care about this issue and who try to make the commemorations, although the official state discourse is against it,” Tatari said.

To follow-up the commemoration, on Thurs., April 30, ASUCD senator Sevan Nahabedian will introduce Senate Resolution #15 (SR15), which calls upon the UC Regents to divest over $74 million from the Republic of Turkey.

Nahabedian said that the Republic of Turkey’s attempts to deny and falsely refute the genocide affect the education of all UC Davis students and increase the likelihood of future genocides.

“[Divestment is] a way to address the institutional wrongs that the Republic of Turkey has been taking,” Nahabedian said. “It’s not meant to ostracize a certain community.”