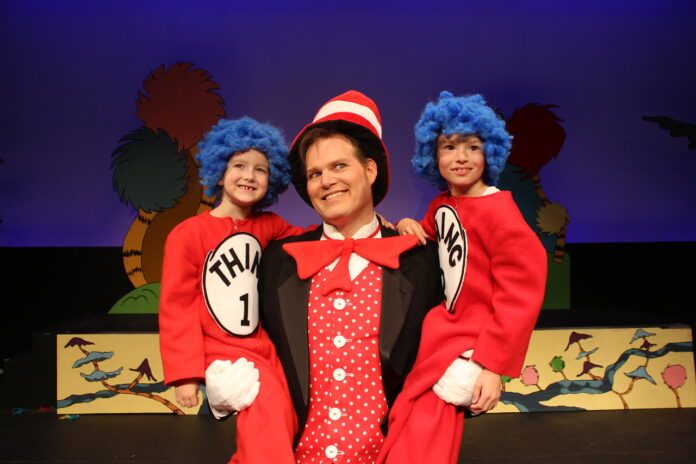 Davis Musical Theatre Company to put on Seussical, The Musical

The works of Dr. Seuss have taught millions of children valuable lessons about the importance of imagination. Now the Davis Musical Theatre Company has come together to bring Dr. Seuss’ stories to life in its production of Seussical, The Musical.

The show started Sept. 11 and runs through Oct. 4 at the Jean Henderson Performing Arts Center. The musical provides fun for all ages and is full of the whimsical magic of Dr. Seuss that many remember from their childhoods.

Steve Isaacson, who co-founded the non-profit theatre company in 1984 with his wife, Jan Isaacson, co-produced the musical and served as co-artistic director.

However, Isaacson is also fast to point out that musicals, while entertaining, can also be a learning opportunity.

“Musicals aren’t just fluff. Every show has a lesson. Seussical teaches you to be true to yourself, be comfortable with who you are in your own skin and that a person is a person no matter how small,” Isaacson said.

The theatre’s staff hopes that, even if one is no longer a child, this musical will still stir up feelings of nostalgia and awaken his or her inner child. Ron Cisneros, the show’s director and choreographer, hopes that people walk away from Seussical feeling happy and full of childlike wonder.

“I hope that people come away learning that you can always do something if you just try. Go after what you dream about,” Cisneros said. “Make sure not to lose your imagination. Grow your imagination [constantly].”

Seussical’s varied music makes it a unique show, and Cisneros admits that part of the reason he agreed to direct and choreograph the show was his love for the music.

“I love the music. It has every genre in it. There’s Latin. There’s rock. It’s a lot of fun [to see] Dr. Seuss and his characters come to life on stage,” Cisneros said.

Peter Nowlen, the music director, was also drawn to the lighthearted, eclectic quality of this musical.

“Every character has a musical theme behind them and that tracks through the whole show and it’s very cohesively written, a very complete musical,” Nowlen said. “All of the different aspects work really well like each of the characters has their own voice not only in their character but also in their musical voice, as well.”

Steve and Jan Isaacson have worked hard to instill a sense of community and camaraderie within the company. The cast and crew form a community that works together to perform what Isaacson hopes is the most professional theatre production possible.

“As producers, we thrust these strangers into a hectic environment and they became a family. Lifelong friendships have been made and marriages have occurred [over the course of the theatre company’s history],” Isaacson said. “We provide this nurturing environment for them where they can expand their talent and make social interactions. These friendships last. It’s amazing.”

There is something magical about this close-knit community of artists. Some, like Ron Cisneros and Mary Young, a 72 year-old actress in Seussical, have been there since the theatre’s start because of the incredible family they have made.

To support the work being done by the Davis Musical Theatre Company, readers can catch a showing of the Seussical on Fridays and Saturdays at 8 p.m., and Sundays at 2 p.m. The show will be running until Oct. 4 at the Jean Henderson Performing Arts Center. For more information, please visit http://dmtc.org/ or the Facebook event page.