We were just outside Davis, on the edge of East Covell, when the horse tranquilizers began to kick in. I remember my editor calling on the cell phone, yelling, “Holy Jesus, where are you goddamn animals? I want an article about the Second Friday ArtAbout by Saturday morning or you’re fired.” I threw the phone out of the car and into a ditch before the bastard could utter another word. My friend and lawyer Pigso had joined me in the mission. Not because he was into art, but because he was hungry and in need of the free snacks and booze offered at every gallery looking to attract patrons.

We reached the Natsoulas Art Gallery at half past five. It was the size of a small castle with a giant blue crystalline head of a dog perched in the

front — or maybe that was the horse tranquilizer speaking. It was a pleasant experience until I reached the second floor. Half of the paintings depicted nightmarish scenes of violence, creepy surrealism, apocalyptic landscapes and creatures that looked half-human and half clown toy. The horror reached its climax when one of the heads popped out of the canvas and frightened the bejeezus out of me. I screamed “Agh! Go back to being paint you art-possessing demon!” I turned around to see Pigso looking disappointed. “I think you’ve had too much tranquilizer,” he said. He dragged me out of the gallery, giving a polite nod to the clerk at the info desk who was wondering why an anthropomorphic fat pig was shoving a six-foot blue horse outside.

After taking a break to get some much-needed fresh air, we headed to our next stop: the Pence Gallery. There, groups of people had already arrived and were comfortably sightseeing floral-inspired artworks. As soon as I got into the groove of taking in the soothing imagery of roses and orchids, I heard Pigso getting into a heated argument. Some poor chap made a pig joke about him and his eating habits at the complimentary snack bar. 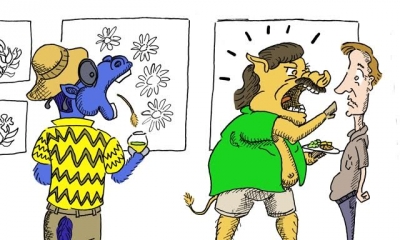 “Who are you calling a pig, you dirty stupid Pig!” yelled the stranger.

“I’m talking about you, ya dumb ape. You got nothing better to do than make smart*ss jokes? I’ll have you know I’m a licensed attorney.”

“Come on buddy, let’s get out of here,” I said, taking Pigso by the arm.

Wrestling Pigso out of the gallery wasn’t as tough as talking the owners out of calling the police. I told them that he had a bad heart and his drug prescription made him irritable.

We continued to the next spot on the Art Walk on hoof. By then it was dark, and the streets seemed busier than ever. Crowds of students prowled about with friends, lovers, co-workers and everything in between. I could see bars everywhere, filled to the brim with people drinking, talking, laughing and staring at their phones. Second Friday was in full swing.

We stepped inside the next gallery to see the cramped office of a guitar maker. In one room was an audience listening to a string performance of 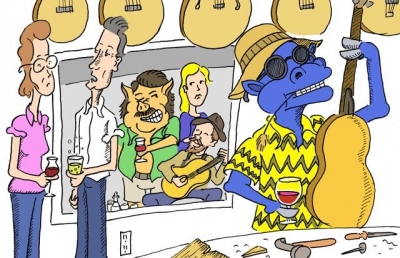 light folk music and in the other room was a workshop filled with wood shavings, tools, half-finished instruments and bottles all over the place. A few people managed to fit themselves into nooks and crannies so they could carry on conversations. Pigso and I helped ourselves to some beer and what looked like store-brand Chardonnay.

Talking with the people was a much more enlightening experience for us. The music was good, the craftsman knew his trade well and just being in his studio made viewing his work feel more special and intimate. You wouldn’t have the same comfy experience meeting whoever built your iPhone or meeting the poor farmer who grew your cheap coffee.

Realizing how much time had passed and how we had to cover the rest of the ArtAbout, I gathered Pigso from a blonde-haired dame he was attempting to chat up and we headed off to the next spot, conveniently located next door.

This place got on my nerves. Aside from the dry cookies and cheap Prosecco, I couldn’t wrap my head around the paintings. They looked like cement surfaces with scratched markings and smeared compost colors. I knew abstract art had to at least be interesting to think about, but this one escaped me. Did not seeing the beauty of these pieces mean I was out of the art loop? Pigso had the right idea to ask the host about the art’s meaning. She simply replied, “That’s a good question. Whatever you think it means.” Needless to say, we both felt cheated and left without anything good thing to say.

Our last spot was further down the road, past another bustling brewery flanked by a line of chain smokers and homeless people in the traditional drab clothing.

We finally reached the place and discovered a gallery that looked like an elaborate gift shop. Everything in sight was either a decoration for sale or an impressive piece of art for the price of $4,115. Nothing was not for sale — with the exception of the guest artist exhibit that was taking place in a significantly smaller room.

Pigso smiled at one painting of a cow: “Hey Gunner, this one looks like Tony. Don’t you think?”

“You know what, I think it does. Didn’t think he had it in him to pose nude.”

By then, it was all over for us. Second Friday was done and there was nothing to do but make our way home. That and drop by a few pubs and frozen yogurt stops on the way. Pigso was sure content after getting enough free samples and enough artist business cards to send his credit card bills. I was still left with my dimwit editor’s Saturday deadline, which I was confident I could finish by Monday.

If there is anything I can praise about the Second Friday ArtAbout, it’s that it got me thinking about ugliness, beauty, hard work, easy money, the price of popularity and the costs of obscurity. If a tourist ain’t interested in confronting the nuances of life, you could just call it a good night out.
You can reach EVAN LILLEY at etlilley@ucdavis.edu