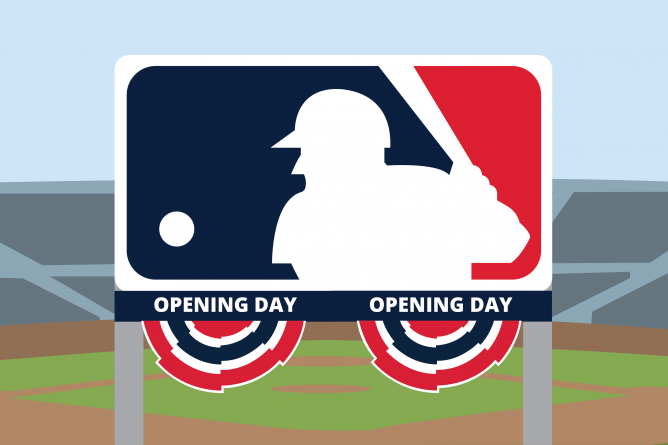 Last year, Major League Baseball (MLB) underwent a myriad of changes in a variety of ways. As teams finalize preparations for the new season, fans can expect something more traditional this year.

April 1 marked the beginning of the 162-game season, as all 30 teams began their quest for the commissioner’s trophy. This year marks the return of the full season, as COVID-19 forced the MLB to shorten their season last year to just 60 games. With an improved testing system in most parts of the country and possible access to vaccinations down the road, the league hopes that the pandemic does not have the same major effect it had last year.

The health and safety protocols set this year have a much better understanding of COVID-19 than the previous year. Aside from each team’s submitted COVID-19 action plan, they will undergo testing every other day and be subject to temperature checks and symptom screenings twice a day. Face coverings must also be worn at all times and in an effort to keep the players and their families safe, MLB has also expanded testing to include an individual’s household.

Additionally, Kinexon contact tracing devices must be worn at all times in any activities with a team and teams must have a contact tracing group that will oversee and try to stop any possible spread of the virus. Any person who was in close contact with someone with COVID-19 has to be quarantined for at least seven days and tested negative after the fifth day to ensure that the individual cannot spread or cause an outbreak. Any person who does test positive must quarantine for at least 10 days and be cleared to return by league and team health officials.

After much negotiation between MLB and the player’s association, the rules set in place hope to avoid the number of postponements they had last year. Similar to the National Basketball Association (NBA), the league has also set rules for players outside of team activities. Players and anybody on the team cannot attend any indoor gatherings of 10 or more people, and members of the travel team cannot leave the club hotel unless they are approved by a committee and must let the team know they are leaving. These are just some of the long list of rules and protocols set up to prevent the spread of COVID-19. MLB has worked with many health officials to ensure they improve off of last year’s experience. While the protocols may seem excessive, sports leagues have learned to nail every last detail, as it may be important in the long run.

On the field, the teams prepare to welcome back fans across the country. From full capacity to a percentage, all MLB teams currently have a plan in place to either host or prepare to host fans. How that progresses over time depends on the progress of each individual state and county, but players are excited to not have to play without an audience, as they all did last regular season.

“I’m extremely excited that the fans are being allowed back in the stadium,” said New York Yankees outfielder Aaron Hicks. “It’s going to be nice to have fans back in the stands and give us some energy and excitement throughout the game.”

As the Los Angeles Dodgers prepare to welcome back fans into Dodger Stadium, they are also preparing to get every opponent’s best punch. The defending champions ended their long 32-year drought by winning the World Series last fall and now look to bank on that momentum. Winners of eight straight National League (NL) West division titles, the Dodgers are also betting favorites to win it all again, at +300. Their offseason addition of NL Cy Young award winner Trevor Bauer and the return of starting pitcher David Price has further strengthened the pitching rotation, and another year of Mookie Betts, Corey Seager and Cody Bellinger together could spell an even more impressive year for the Los Angeles team that is looking to make it two straight.

About 120 miles south of Dodgers Stadium is another NL West team who is looking to make some noise—the San Diego Padres. The Padres were not shy about making moves this offseason, as they traded for aces Blake Snell and Yu Darvish and added potential breakout right-hander Joe Musgrove to a stacked rotation. Coming off of their best season in some time, San Diego is hoping to ride the youth and talent into a long postseason run to finally break the curse.

As far as young teams go, the Padres are right there with the Atlanta Braves in terms of the young stars. Led by Ronald Acuña Jr., the Braves are hoping to bounce back from their crushing NLCS loss to the Dodgers—a series they led 3-1 before losing three straight games. Atlanta was able to retain outfielder Marcell Ozuna and add Charlie Morton to their rotation as well. With NL Most Valuable Player Freddie Freeman there, Atlanta is hoping to get over the hump this time around and get back to their first World Series since 1999.

Teams in the Big Apple are trying to get back into the thick of things as well, as both the New York Yankees and New York Mets have inserted themselves into the mix. The Yankees were able to re-sign infielder DJ Lamathieu and sign former Cy Young award winner Corey Kluber. After suffering a tough loss in the second round of last years’ postseason, the storied franchise is trying to change their postseason misfortune of the last decade and get back to the World Series.

On the Mets side, a multitude of changes from ownership to executives led to their most exciting offseason in some time. They pulled off a blockbuster trade for All-Star shortstop Francisco Lindor and starting pitcher Carlos Carrasco who many have seen as the steal of the offseason. A lot rests on the health of aces Jacob DeGrom and Noah Syndegaard, but the Mets were finally able to reinsert themselves back into the conversation heading into the season.

This year will serve as another sense of normalcy for the fans, as the MLB is going back to its traditional roots. With 162 games, no designated hitter and no expanded playoffs this time around, this year will likely have the feel of a pre-COVID-19 year. Teams will still have to take precautions, but if many factors continue to improve, all protocols set in place are subject to change and adjust with the situation. With spring time approaching and baseball season here once again, teams hope they aren’t interrupted this time around as they begin their long journey toward World Series glory.