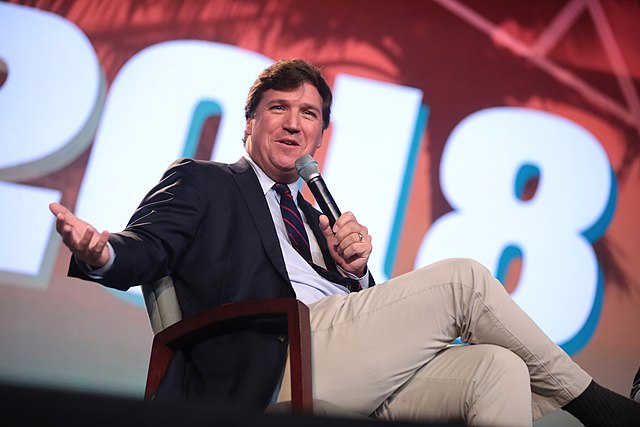 Big news today on Capitol Hill as Republicans face a minor ideological crisis following a viral Tucker Carlson clip. On one of his signature rants in defense of American liberties and the corruption of the left, Fox News pundit Tucker Carlson accidentally slipped into far-left talking points.

At first, the tangent was barely recognizable as differing from typical content. But after mentions of seizing the means of production and a quote by Leon Trotsky, many viewers did a double-take.

Debates continue to rage over whether Carlson’s remarks can be more accurately labeled as communism or democratic socialism as Carlson seemingly advocated for the exploited working class at the expense of the “rich.”

This apparently accidental move has prompted a small exodus of Republicans to the newly formed “Trump-Marx” party. The red hat remains, but it’s got a new hammer and sickle.

Some are claiming Carlson’s statements as the beginning of a clever coup. However, Carlson’s lawyers assure us he is not capable of being that subtle.

Instead, they are repeating a former defense by Fox News claiming the “‘general tenor’ of the show should then inform a viewer that [Carlson] is not ‘stating actual facts’ about the topics he discusses and is instead engaging in ‘exaggeration’ and ‘non-literal commentary,’” which is an actual thing Fox News lawyers said about their news program.

On TikTok, a hoard of teens and young adults have already begun idolizing Carlson, calling him a “girlboss” and editing him into fan videos soundtracked by Doja Cat hits.

“baby!!!” tweeted one user along with a photoshopped image of Tucker Carlson in cat ears.

“stan Tucker for clear skin,” tweeted another along with a barrage of emojis that warrant immediate psychiatric attention.

In response, Ted Cruz’s publicity team edited him lounging around his home while Lil Nas X’s newest single “MONTERO (Call Me By Your Name)” plays in the background. A class-action lawsuit has already been filed against Cruz for emotional distress.

Mission impossible: In search for a triceratops