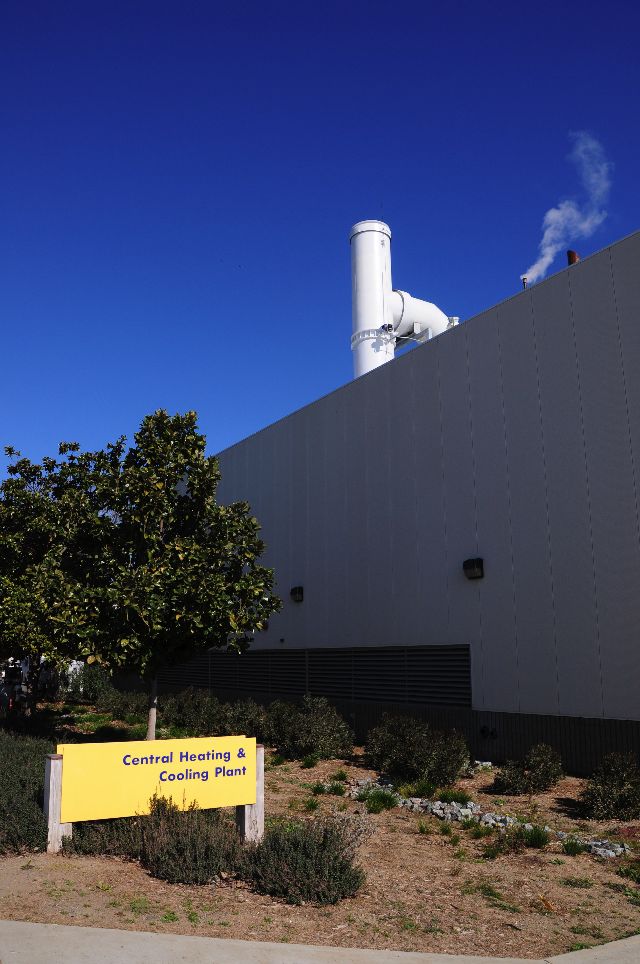 Water vapor from the campus steam plant will be used to provide heat and hot water to the Tercero Phase 3 campus dorms. Tercero 3 is currently under construction and is expected to be finished by June 2014.

This process of heat transfer is made possible through the use of a condensing economizer, a piece of equipment that captures the steam and heat that usually escapes from the plant, and instead utilizes the steam to heat the dorms.

The condensing economizer utilizes heat energy that would otherwise be wasted and would escape into the atmosphere, according to Joshua Morejohn, energy manager for Facilities Management at UC Davis.

“Without the condensing economizer, the heat goes out into the atmosphere at 300 degrees,” he said.

According to Pablo Orozco, senior project manager and assistant director of engineering for Design and Construction Management, this new system will have positive effects both economically and environmentally.

“By collecting energy that was being wasted, we save about $400,000 a year … We’ve reduced the overall natural gas consumption of the campus by 5 percent. We got a rebate from PG&E and we expect another rebate for $20,000. It increases the efficiency of the dorms … and because we are using and putting that heat to good use, we are increasing the efficiency of the boiler by that amount,” Orozco said.

This project is being funded through a one-time rebate of $511,000 from PG&E to the university for the 511,000 therms of natural gas that the university will be saving every year.

Michael Sheehan, director of Student Housing Facilities Services, said that the heat transfer project began because the campus was looking for ways to increase energy efficiency.

“The campus engaged a consultant to make recommendations to increase energy efficiency at the central plan. One of the recommendations was the heat recovery system, but at the time of the recommendation there were no appropriate buildings to be served,” Sheehan said. “However, the Tercero Phase 3 project was in planning and we were approached by campus [personnel] on the potential for linking the project to the new system. Once we learned more about the heat recovery project and the details were worked out, it became a great synergy and both projects moved forward.”

Construction on this project began Mar. 12, 2012 and the condensing economizer was activated the following November and is currently being used in the campus steam plant.

According to David Phillips, director of utilities, the economizer is expected to be used to heat more dorms in the future.

The revolutionary aspect of the economizer, according to Phillips, is that it allows the use of hot water instead of steam to heat the buildings.

“That’s like a really new idea for campus. Steam takes a great amount of energy. When you start using hot water, it opens up a whole new world of technology, for sustainability reasons …That’s the trend that’s really exciting. This is our first little expansion,” Phillips said.