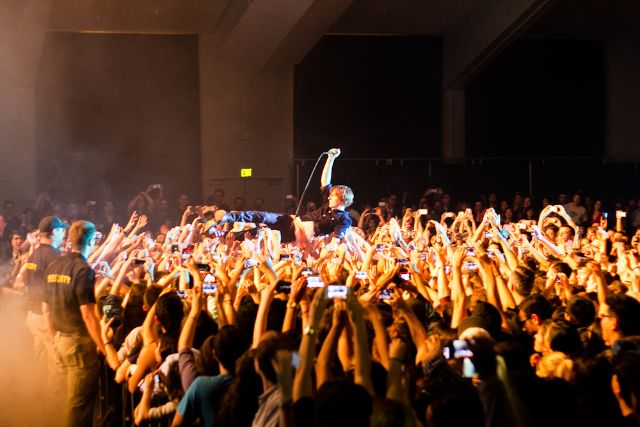 Then they crammed in an extra 30 people.

Canadian rock band Mac DeMarco opened the night, entertaining the crowd with their laid-back Canadian antics. Their sound ranged from slow and soothing with “Ode to Viceroy,” to their rocking song about meth, “Cooking Up Something Good.”

The lights cut out and Phoenix came out loud with their new song, “Entertainment.” The fog poured out from the stage and the energy only increased with their eight minute banger, “Love Like a Sunset,” with the song culminating into a wall of sound and light. The band played a set picked from third and fourth albums with songs like “Long Distance Call,” “Rome,” “Consolation Prizes” and “Lasso.” The French rock stars played four more songs from their new album: “Chloroform,” “Drakkar Noir,” “Oblique City” and a bonus song on Bankrupt!, “Trying To Be Cool.”

Bringing the night to a close, the band came back out for an encore, playing a slowed-down version of “Girlfriend.” Finally, lead singer Thomas Mars surfed into the crowd as they finished their set with “1901,” a crowd favorite.