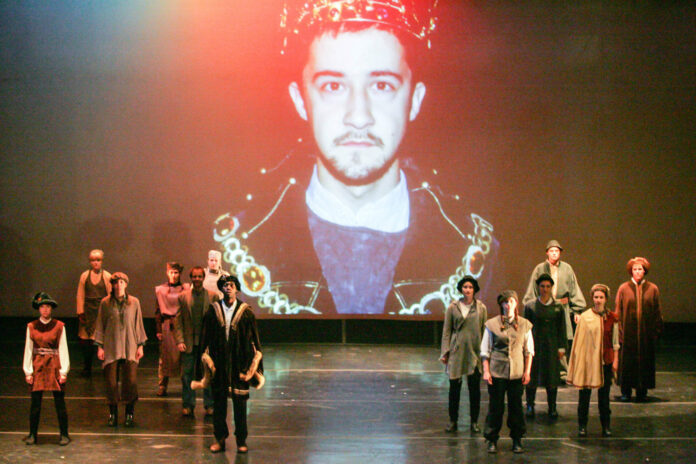 Shakespeare’s plays often focus on nobility, but a new play from a UC Davis grad student focuses on the common people. The Dogs of War, directed by Joselle Miller, a Ph.D. candidate in performance studies, takes scenes from some of Shakespeare’s plays and uses an ensemble cast of 16 people playing four dozen roles to present a different version of Shakespeare that focuses on the people who fight in battles.

MUSE: Can you describe your work?
Miller: Dogs of War is an adaptation of Shakespeare’s eight history plays that deal with the War of the Roses, Richard II, Henry IV Parts 1 and 2, Henry V, Henry VI Parts 1, 2, and 3, and Richard III.

These plays were often adapted together since they were a cycle and cut down to make them fit into one sitting. Usually when that happens, the scenes that get cut out are the scenes of common people, citizens, soldiers and nameless servants because they’re not the A-Plot.

I went through the plays, took all the scenes that deal with the common people and put them together to tell the story of the War of the Roses from the common people’s perspective. All the text is Shakespeare’s — I haven’t written anything myself — but the scenes tell a different kind of narrative about the nature of war.

MUSE: How did you get the idea?
Miller: I was doing a reading course with one of my professors, Peter Lichtenfels, and we were looking at various plays by Shakespeare with the question, “What is not being said? What is happening in this play or in this particular scene that is not being articulated?” We quickly found that in the Histories, there was a significant thread of the commoner experience that was either not being articulated at all or articulated and then quickly brushed aside, so seeing that thread was a major inspiration.

One scene in particular featured Henry V threatening these villagers and they were totally silent. That huge body of listening people just stuck out at me. Another scene in Henry VI Part 3 has Henry VI giving a monologue and during this a man comes in with a body he just killed and he is looting it for money — back then, this was often the only way soldiers were paid — and he takes off the soldier’s helmet and realizes he killed his father. A second person comes on dragging the body he killed and it turns out to be his son.

You get this juxtaposition that is similar to the cultural memories we have of the American Civil War of brother against brother, father against son, and everything breaking down in individual family units.

MUSE: Can you describe the set design?
MILLER: Travis Kerr is the scenic designer. He’s an MFA in design at the Department of Theatre and Dance. What we’ve done — and this is for the production design overall — is that we’re using what I call an Elizabethan aesthetic but done in a contemporary way, like we’re self consciously doing it in 2013.

For instance, we’re using modern materials in the costumes, materials that didn’t exist back then but point towards that aesthetic. We’re trying to keep the audience aware of where they are — Wyatt Theatre, 2013 — as they encounter these plays written 400 years ago. Another aspect is the explicit theatricality of it. Think about it as if we’re doing magic but we’re showing the strings. The props are all basic shapes that the actors configure into props like tables. They’re not literal and realist at all.

Similarly, all the actors are in a base costume and they put on different components to be different characters, but the audience often sees those costume changes happen on stage, so this reminds them that these actors are performing for them.

MUSE: By reminding the audience that they’re watching a historical play, what do you hope to accomplish?
Miller: To be frank, the only reason I’m in any way interested in doing Shakespeare at all is in terms of what it can tell us about how we’re living right now and who we are to each other. I’m not interested in doing it as a museum piece. For me, I wanted to explore how the people who make decisions to go to war are different from the people who actually go to battle in those wars. They’re different now and they were different than in this story. I’m trying to make people recognize themselves in these narratives.

MUSE: How is it working with the Design Department?
Miller: It’s fabulous. The nature of theatre is that you can’t do anything by yourself, so you by necessity have to be a good collaborator if you’re going to get things done, and luckily the people here are experts at that. The design team, our production staff in the costume shop, the professors here supporting the development of this work … there are a whole lot of people who are spending a lot of time and energy working and thinking and talking about this project.

The Dogs of War, written by William Shakespeare and adapted and directed by Joselle Miller, will play at the Wyatt Pavilion Theatre on May 16 to 18 and May 23 to 25 at 8 p.m. and May 19 and 26 at 2 p.m. The play is free of charge to the general public.

The irony of nicotine addiction in Generation Z