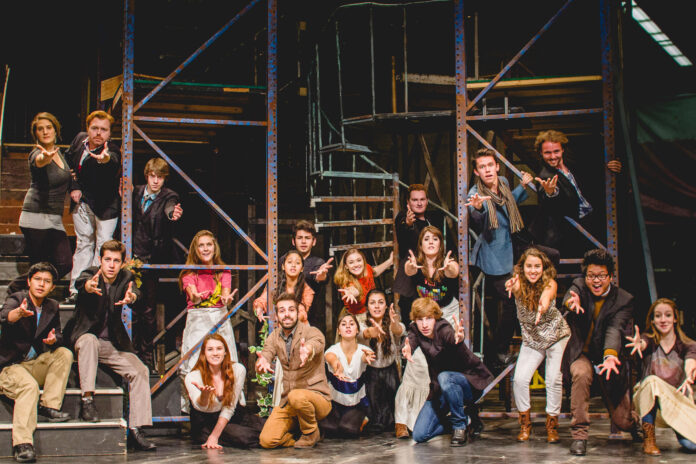 Spring Awakening was originally a play written in late 19th century Germany by dramatist Frank Wedekind. The play covered topics that were controversial at the time including teenage pregnancy, homosexuality, institutional corruption and abortion. In 2006, a musical adaptation of the play debuted, incorporating rock ballads by composer and singer-songwriter Duncan Sheik.

The musical is a coming-of-age story following the sexual awakenings of multiple teenagers under the constraints of 19th century Germany. The characters each begin to explore their physicality and emotions all while attempting to overcome the obstacles of censorship, institutional authority and their own innocence.

The cast of the show is composed mainly of UC Davis students. The actors vary from freshmen to graduate students to staff members, each studying various majors.

The show is famous for portraying raw scenes of human struggle and emotion. Specific issues touched upon, like sexual abuse and suicide, have been carefully worked upon in order to convey serious, thought-provoking scenes.

“It deals with very challenging themes, and we’ve been very cautious and careful to talk a lot with the student actors about keeping an open environment so we’re not brushing past those difficult issues,” said Chris McCoy, who is the musical’s assistant director and choreographer.

Though the subject matter may be heavy, the lessons put forth are meant to be relatable to the audience, especially teenagers and young adults. The show is supposed to reflect the journey from childhood to adulthood, a universal experience.

“What I like about the show is that there’s something that everybody can relate to,” said fourth-year neurology, physiology and biology major Johnny Wylie, who will be playing the role of George. “The issues that we touch on in the show are things that every person has been through to a greater or lesser extent.”

Fourth-year communication major Jessica Walsh will be playing the lead role of Wendla. She has found that behind the difficult lessons, the musical really offers a message of hope.

“The show is really about relationships and how important it is to really love and accept everybody,” Walsh said. “It shows that no matter what someone is going through, all you should do is give them love and acceptance because that’s all anybody really needs.”

Even amongst some dark themes, the musical showcases an array of lively songs. The pieces include “The Bitch of Living,” a song about sexual frustration and fantasy amongst pubescent adolescents, “Totally F***ed,” an angsty ballad about the corrupted school system and “Mama Who Bore Me,” a plea to parents to stop hiding information about sexuality and reproduction from their children.

Almost all of the songs feature original choreography by McCoy and utilize a mix of props including chairs, jungle gym-like high rises and flashlights.

Second-year psychology and dramatic art double major Jen Beall is the dance captain for the show and has enjoyed the big dance pieces.

“My favorite song is ‘Totally F***ed’ because there’s lots of high energy and there’s so much going on with the dance,” Beall said. “There’s one part of the song we like to belt out as loud as we can; it’s really exciting.”

Director Arima hopes to convey all of these elements coherently in the production all while keeping the show unique to the UC Davis cast.

“One of the exciting elements of Spring Awakening is coming to rehearsal and seeing the awakenings that are happening within the actors,” Arima said. “At the end of the day the message I hope audiences take away from the show is that you’re not alone. Everybody is going through a variety of awakenings within themselves and those awakenings never stop.”

Spring Awakening opens Nov. 21 at the Main Theatre in Wright Hall. Tickets can be purchased at the Mondavi ticket office or online at tickets.mondaviarts.org. Tickets are also sold at the theater door starting one-half hour before curtain time (pending availability).