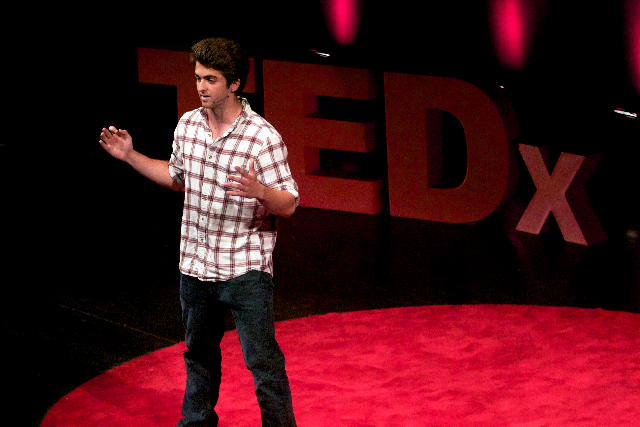 On May 4, students and community members alike joined together at the Mondavi Center to attend the fourth annual TEDxUCDavis event. Based on the well-known TED talks, which has the motto of “Ideas Worth Doing,” TEDxUCDavis is just one of many independently organized TED events that occurs often all over the world.

“Cory Warshaw started this from scratch about four years ago and is now an alumni,” Smotherman said. “It’s slowly progressed in size up to where we are now, where this is the first time we’ve ever been in Mondavi.”

The theme of this year’s TEDxUCDavis was “Pause or Press Play?” The host of the event and event programs encouraged the audience to consider at what times in their lives they should take the time for reflection, and at what times they should jump right in to the unknown without looking back.

“I have been watching TED talks since high school, and I had always found their mix of deep ideas and creative presentations appealing,” said Cory Warshaw, the founder of TEDxUCDavis, via email. “I felt if we could bring that style of conference to Davis, we could create a space on campus where people could share their own passions and dare I say it, make ideas cool.”

TEDxUCDavis Director of Marketing Shavika Singha believes that the conference also gives the Davis community a chance to see the talents of UC Davis researchers.

“It’s an opportunity for the community to see what the real heart is in the UC system and what the real purpose of researchers and research is,” Singha said.

Although hosted on the UC Davis campus at the Mondavi Center, TEDxUCDavis promoters encouraged the greater Davis community to attend the event as well.

“I wanted to bridge the gap between the University and the community of Davis,” Singha said. “I want to make it less of an exclusive UC-attended event and encourage community members to come.”

The TEDxUCDavis team worked for months before the conference in order to ensure the event’s success.

“The speaker process is what really takes up most of the time because we start right at the beginning of the year,” said Allison Butler, TEDxUCDavis director of speaker relations. “We have a speaker selection committee, and right from the get-go we use connections we have from different TED events, and then we start contacting those people to see if they’re interested. Then we start meeting in person with these people. We go from emailing 100 people to breaking it down to 11 or 12. It’s cool because we get to work closely with the speakers.”

The TEDxUCDavis team has also worked on previous projects to bring TED projects to the UC Davis campus. Earlier this year, the team held the Davis Inside Out project, in which 400 photos of UC Davis students and community members were posted on the outside of the Social Sciences and Humanities building in order to recognize the individuality of campus members.

“This originally comes from a French artist called JR,” Butler said. “In 2011, he won an award for TED. After his recognition with TED, this project is going up all over the world. It’s really kind of a global art project.”

According to the TEDxUCDavis team, TED talks are the perfect way to engage students and community members to make a change.

Warshaw’s goal is for event attendees to take what they learned from the event into their daily lives.

ALYSSA VANDENBERG can be reached at campus@theaggie.org.