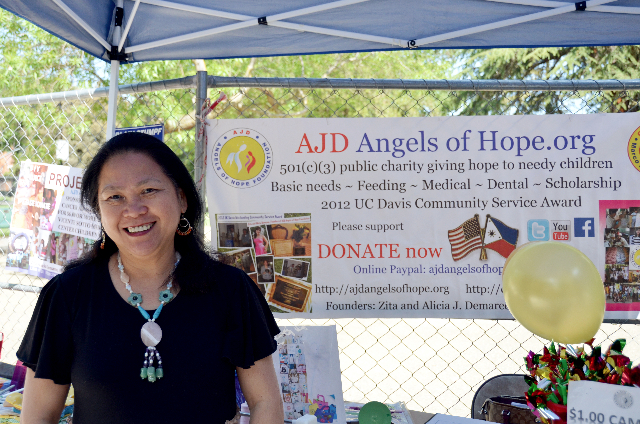 Many hardworking UC Davis clubs and individuals were recently recognized in the 2014 Community Service Awards.

After being nominated, the participants were required to fill out a short application that the CSRC then reviewed. The recipients received certificates for their assigned category — which were determined by various aspects of their work in the community. The categories for the awards are Outstanding, Gold, Silver and Bronze, in order of prestige.

Third-year communication major Viktoriya Mlonchina won an Outstanding award for her organization “Stories for Success (SFS),” a nonprofit tutoring program for English as a Second Language (ESL) students at an elementary school in San Francisco.

As a Ukrainian immigrant herself, Mlonchina began elementary school as a student in the ESL program.

“In my teen years, I became aware of the severely depleting resources allocated to ESL students and chose to make a change,” Mlonchina said. “At age 15, I, along with my friend and business partner Mikhail Vysotskiy, created SFS. Mikhail and I also created a free curriculum based on the California Public Schools English-Language Arts Content Standards.”

SFS officially launched in November 2009 with 26 students, and has now expanded to 15 tutors and 40 students.

“Our progress is traceable through parents and teachers’ personal accounts and our students’ rising grades and test scores,” Mlonchina said. “I’m so proud of SFS’s evolution and its positive impact on our students’ personal and educational paths.”

Mlonchina said that receiving the award reassured her that her organization is still making a visible impact on students’ lives.

“It puts a huge smile on my face to visit the program when I’m in San Francisco and see how actively our students and tutors engage with one another,” Mlonchina said. “The program meets on Fridays after a long week of school, but I can see that the kids really enjoy being there. It doesn’t feel like a chore for them.”

Along with Mlonchina is two-time Outstanding recipient, fourth-year international relations major Mana Azarmi. Azarmi was rewarded for her work in two organizations: Bottles for Poverty and the Human Rights Brigade.

“Bottles for Poverty is a club on campus that is seeking to combat poverty by providing communities with access to education,” Azarmi said. “People donate and drop off their recyclables at 688 Bianco Court in Davis, and we redeem those for cash.”

The organization has successfully built their first school in Gondar, Ethiopia and is now just $800 short of building a well for the school.

The other organization Azarmi participates in is the Human Rights Brigade, which has grown tremendously since its start in 2012.

“We send brigades — groups of about 20 to 25 people – to Panama and work with lawyers and world communities there, and we try to facilitate empowerment of the communities by providing them with legal workshops, access to lawyers and providing human right workshops,” Azarmi said.

Azarmi also emphasized that she would not have been as successful in her volunteer work without the support of the organizations and especially the help of her two vice presidents at Bottles for Poverty.

“Coming to Davis I was looking to do something and the service community here is very welcoming and it’s great fun — you meet a lot of people and get to do good things. It’s definitely rewarding,” Azarmi said.

The community service work that Azarmi does through the two organizations has had quite an impact on her future career plans as well.

“For me, I always knew I wanted to do human rights work,” Azarmi said. “Working with these two organizations has solidified that yes, this is definitely the path I want to go down, and it’s just the kind of work I like doing.”

A third Outstanding recipient, fourth-year animal science major Ciara Main, received the award through her work with Get on the Bus.

“Get on the Bus is a statewide, non-profit organization that was started in 2000,” Main said. “The organization as a whole caters to children of incarcerated parents. We go to about 17 of the state prisons here.”

Main said Get on the Bus has grown tremendously since she brought it to Davis in her third year.

“We started with just myself, then with three people kind of collectively just going over ideas, and it’s really blossomed,” Main said. “It’s crazy how much it’s grown. When I say it’s grown, not necessarily in numbers but in passion. The people in our club are really what make it.”

Get on the Bus not only makes travel bags for children visiting their parents, but they write letters, facilitate visits and hold various other events.

“The very first meeting I had for Get on the Bus was in Geidt 1001; I walked in and expected something big,” Main said. “I thought ‘Oh everyone understands children of incarcerated parents,’ but there were only four people in that big old lecture hall. I felt so small in that moment — I thought ‘I can’t do this.’ Now, just me being a fourth-year and seeing how big it’s grown and what we’ve accomplished, it’s definitely amazing.”

“Inspired by my mother’s own hardships growing up as a woman in rural Pakistan, I decided to take action and work to make even a small change if possible,” Ahmad said. “I would like to give women and girls a greater sense of Azaadi — which means freedom and independence in Urdu — to pursue life’s opportunities through making menstruation a non-issue so that girls can stop missing school.”

Each month due to the lack of women’s hygienic products, females in Pakistan continuously miss school and some even end up dropping out. To raise awareness in the community regarding this issue, Ahmad collects donations.

“I aim to empower women through providing them with sexual and health education and skills on how to care for themselves while on their menstrual cycles,” Ahmad said.

Ahmad says that the work she does for her project is very fulfilling, and is very thankful to her parents for their unconditional support.

“Love is like a flame, and when it spreads it has the power to heal and energize our spirits. I feel good inside and that’s when I know I’m doing good and want to do more,” Ahmad said. “I keep to myself mostly, but when there’s a need for help, I find myself going out of my way to help whoever is in need.”

One last Outstanding recipient for this year’s Community Service Award, Zita Demaree, has worked in student housing for 24 years after moving to Davis from the Philippines. She received the Outstanding award for her charity “AJD Angels of Hope” this year, and won one for it back in 2012 as well.

“It was my daughter who came up with the idea when she was 14,”  Demaree said. “It was so inspirational that she was even able to think about it. When we visited the Philippines, I brought my daughter to the sites where there’s a lot of slums and she said ‘Mommy we should send them my clothing and toys’ — we just started sending them our own things.”

Demaree said at first it began with her calling garage sales and neighbors to ask if they could have their leftover items; it was never intended to become a charity. Initially, she was able to ship eight boxes to the Philippines where she and her brother distributed them to impoverished areas.

In 2012, she started a “project bear” with the intention of helping children with cancer here in California. However, due to various complications she ended up donating the bears to the Philippines as well.

“I went there and distributed it myself,” Demaree said. “To me that was so close to my heart because you’re actually there and you see kids that are dying.”

Not only does AJD Angels of Hope give aid to the Philippines, but they also have events here every December where they give food, canned goods and clothing to people in Davis. Demaree says she’s very thankful for the help she receives from volunteers in the Davis community.

“I’m very grateful for any accomplishments we achieve and thankful for what UC Davis does for us,” Demaree said. “My organization helps students in the area when they come to volunteer as well. They not only come to get leadership, but they need it for their schooling. Because I’m here, I’m accessible — a lot of students call me to volunteer. I like it! I like it because I get to build all the students’ leadership and community service skills.”

ELLIE DIERKING can be reached at features@theaggie.org.