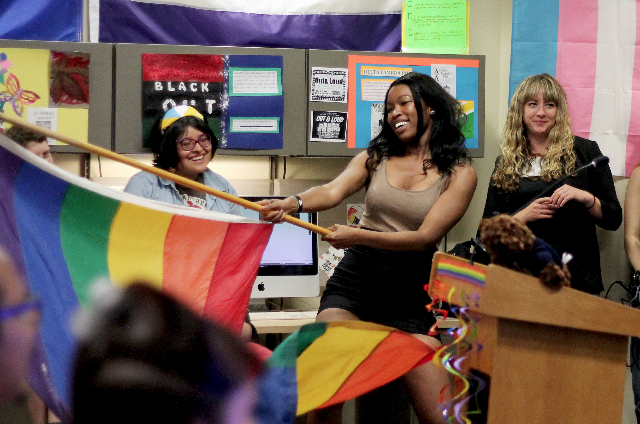 From May 5 to May 9, UC Davis celebrated Pride Week on campus. Put on by the LGBTQIA Resource Center, the theme of this year’s Pride Week was “R.O.A.H.R,” an acronym that stands for Redefining, Open-Hearts, Active, History and Revolution.

“I think Pride Week is important to campus because it sheds light on the LGBTQIA community and gives the greater UC Davis community a chance to learn about LGBTQIA issues,” said Brianna Hoy, a third-year genetics major involved in planning Pride Week. “It also allows those within the LGBTQIA community to come together in a safe space for workshops and get-togethers to show that they are proud of who they are and no matter what they are very much a part of this campus.”

“Pride week is important because this allows for us to celebrate the different identities that come to UC Davis,” Reynoso said. “We let others know that we are here no matter how we identify ourselves, and there will always be support here no matter what.”

Events during the week included an open mic, creative writing workshop on self-affirmation and healing internalized shame, a presentation on queer media and interactive workshops and discussions.

“We had a large variety of events that we offered throughout the week and each one resonated with different people in different ways,” Hoy said. “I can speak for myself and say that the event that resonated the most with me was the Open Mic Night. The works that were read brought goosebumps to my skin and tears to my eyes. They were tales of anger, love, reconnection, identity and pride in being the person they truly are.”

The week also celebrated the LGTBQIA Resource Center’s 20th anniversary on May 7, commemorating the center’s history and achievements.

The week concluded with a closing ceremony on May 9 that featured keynote speaker and UC Davis alumna Migz Espinoza.

Espinoza, who graduated from UC Davis in 2013, was highly involved in LGTBQIA Resource Center events during her time at UC Davis, even coordinating several events and workshops herself.

“I spoke briefly on the history of student activism that occurred while I was a student, as well as that which enabled the creation of the center,” Espinoza said. “Student activism, and particularly queer student of color organizing, has been a major part of my academic career.”

Espinoza hopes that, as a recent graduate, she was able to speak directly to the students who attended the ceremony.

“I’d like to think the intentionality of having a recent grad spoke to the younger, fresher generation of student leaders and activists; those who don’t recall the LGTBQIA Center being in an annex or the vandalism and activism that produced the SCC,” Espinoza said. “Also, having had multiple experiences forging new paths as a transwoman of color in ASUCD and senate, in student affairs as student assistant to the Chancellor, and all around organizing, I hope I was able to ignite some dialogue about inclusion and transphobia.”

Espinoza’s speech was well-received by the students who attended.

“It was amazing to see an alumni from UC Davis come back to share her words of wisdom and advice,” Hoy said. “Her speech and poetry were beautiful and the perfect way to end Pride Week.”

Espinoza hopes that Pride Week will continue to evolve in coming years.

“The need for representation and resources will always persist, but the evolution of the LGTBQIA and the queer community’s visibility on campus has a lot of productive potential,” Espinoza said. “It’s always refreshing to see the changing programs and get a sense of the campus climate in that students organize around the most pressing and needed issues.”

ALYSSA VANDENBERG can be reached at campus@theaggie.org.