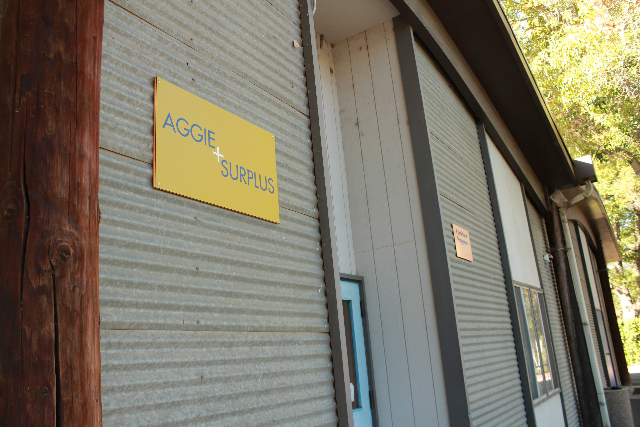 Aggie Surplus, formerly known as the Bargain Barn, recently underwent renovations to bring in more student traffic and update the overall aesthetic appearance of the facility. These aesthetic renovations have varied from painting walls and redoing flooring to rearranging the store display.

Aggie Surplus specializes in the sale of marketable items that are either sold or donated to the facility for resale. Some of these items include office supplies, technological supplies, mattresses and blankets from student housing and dorms and video games from the game area in the Memorial Union.

Typical student supplies such as laptops, cell phones, computer batteries and other technological supplies that are typically more expensive can be found the the sales floor.

According to Aggie Surplus coordinator Michelle Belden, the new name and logo were created in the hopes of encouraging more student involvement and traffic. Belden said that the new name has the potential to “foster some Aggie Pride” and more closely associate the facility with the campus and UC Davis students. UC Davis students have played a vital role in the revamping of the Aggie Surplus facility since the project began last school year. The Aggie Surplus logo was designed and created by various students in the design department on campus. There are also six student employees that work part time on the sales floor in addition to a full time staff.

According to Larissa Whelan, a former student employee at Aggie Surplus and UC Davis student, she was surprised by how little the student body appeared to know about Aggie Surplus while she worked there.

“This business is where you can get free binders and file folders, where recycling and reusing coincides with a person getting an item they love and where regular customers quickly learn each other’s names and become part of this community,” Whelan said.

According to Whelan, the facility provides both students and community members with various items at a lower price and is an beneficial employment opportunity for students on campus that many may not know about.

“It’s really more than just a surplus store. It helps employ students, decreases the amount of waste that goes into the landfill, and gives a sense of community to those who both live and don’t live in Davis,” Whelan said.

Non-profit organizations are also able to register with Aggie Surplus to receive excess materials that are donated. According to Belden, this list serve plays a large role in diverting waste and working towards sustainability.