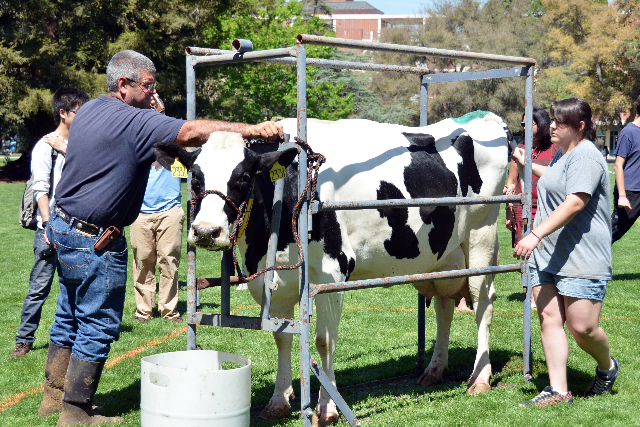 UC Davis researchers have recently received a combined total of $6.9 million to study the health benefits of cow milk.

To fund the study, The National Center for Complementary and Alternative Medicine gave $4.2 million to a team led by David Mills, a UC Davis professor in the Department of Food Science and Technology, and the National Cancer Institute gave $2.7 million to a team led by Yu-Jui Yvonne Wan, a UC Davis professor as well as vice chair for research in the Department of Pathology and Laboratory Medicine of the UC Davis Health System.

Mills said, in the past, UC Davis researchers have focused on the health benefits of human milk, which enriches a specific type of protective bacteria in the guts of babies. This type of bacteria lowers the pH levels and prevents pathogen growth. Now, researchers hope that similar benefits can be found in bovine milk as well.

“First and foremost, we want to understand what’s going on with human milk,” Mills said. “That really becomes the model [for bovine milk].”

Mills says that UC Davis research regarding both human and bovine milk has been going on for over a decade.

Additionally, Mills said that the new grant his team has received from the National Center for Complementary and Alternative Medicine is part of on-going research, as he has had two other grants with them on this subject in the past.

“This is, in a sense, continuing a long line of funding,” Mills said.

Mills says that he hopes future research regarding bovine milk will create ways to help individuals suffering from health issues.

“We want to define all of the aspects of milk and how they interact with the bacteria and how that helps the milk,” Mills said. “Can bovine milk provide similar structures and do similar things [as human milk]?”

If bovine milk does provide a similar structure to human milk, Mills said that it could potentially help babies who are unable to nurse, as well as help fix a variety of health-related issues.

According to Michael McCarthy, chair of the UC Davis Department of Food Science and Technology, researchers still have a lot to learn about the food components and how they impact human health.

McCarthy said that the large amount of funding this UC Davis research program has received is significant in many ways.

Lydia Howell, chair of the Department of Pathology and Laboratory Medicine of the UC Davis Health System, stressed the importance of continuing milk research at UC Davis.

“This is the type of work that can only be done at UC Davis,” Howell said. “This project capitalizes on our campus’ unique strengths in agriculture, nutrition, and biomedical science, as well as our culture of innovation and collaboration.”