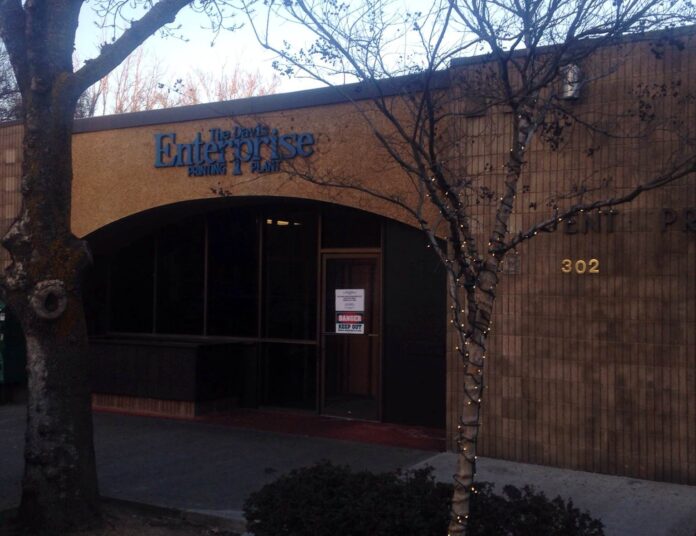 On Jan. 3, The Davis Enterprise released its first remotely printed newspaper. Since its establishment, The Davis Enterprise has been printed in its pressroom located on Third and G Street. The official newspaper for the city of Davis is consolidating its press operations and will be printed at its sister newspaper, the Daily Republic, in Fairfield.

“We built this press in 1966 and it was on the edge of town, now we are in the middle of a vibrant downtown area,” said Davis Enterprise Publisher, Burt McNaughton.

According to McNaughton, the printing of the first edition of the Enterprise to be printed in Fairfield went smoothly.

Davis Enterprise Editor-in-Chief, Debbie Davis, said that there were some glitches in the first week, but they were to be expected in a transition such as this one.

“We’re ironing them out quickly. Our customers are receiving their newspapers on time, and that’s what counts,” Davis said.

Although the printing of the newspaper changed, the content will uphold the standard that the Enterprise’s readership expects of it, according to Davis.

Davis said that this change enables the Enterprise to save money and streamline its operations, which will help to solidify its financial well-being.

The publisher of the Daily Republic in Fairfield, Foy McNaughton said that the transition has gone pretty well.

“The challenge is now, we have two crews when we used to have one, a day crew and a night crew,” McNaughton said.

McNaughton said that consolidating the Enterprise’s printing operations was a plan that had been in place for years, and only now was it finally coming to fruition.

“It is a lot more efficient as it is a bigger press in Fairfield,” McNaughton said.

According to McNaughton, the Enterprise was one of the last newspapers to have its own press operation.

“A lot [of newspapers] have been outsourcing their press rooms,” McNaughton said.

A factor in the decision to move the printing operations was the 302 G Street location being such a prime piece of property.

The plan, according to Burt McNaughton, is to renovate the 5,000 square-foot space into FIT House, a fitness studio. The Enterprise’s main offices will remain open at 315 G Street.