So Ra Kim presents the power of percussion 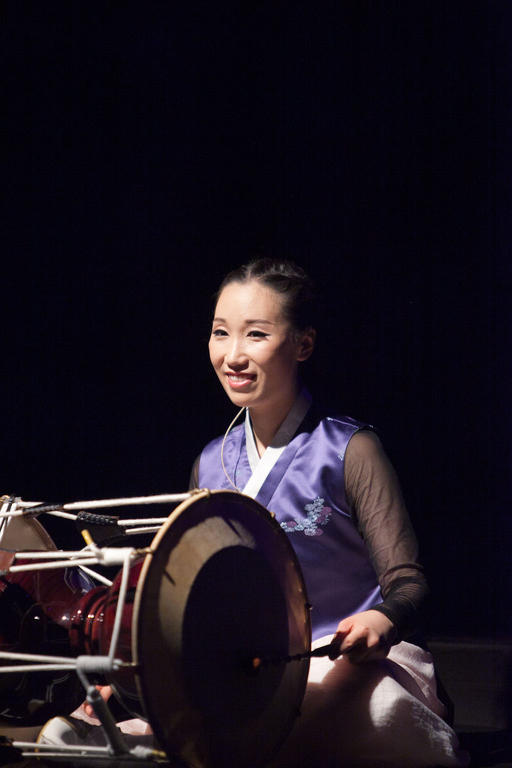 Using the power of percussion, South Korean musician So Ra Kim illustrates constellations of cultural traditions, from original beats to expressions of identity. On Feb. 20, Kim’s percussion quartet will be performing at the Mondavi Center, presenting Korean folk music in contexts both traditional and new.

Kim has practiced p’ungmul and samulnori – forms of traditional Korean percussion music and dance – since the age of 10. Both genres are rooted in Korea’s agricultural customs and are performed during peak harvest cycle times and certain holidays.

Kim specializes in playing the janggu, which is an hourglass drum integral to both p’ungmul and samulnori ensembles. Like a rhythmic compass, the janggu guides a piece through dynamic narratives.

With the janggu’s expressive versatility, Kim explained that she approaches the instrument both traditionally and creatively to showcase its musical capacity.

“Percussion is [both] very sensitive and strong,” Kim said. “I try to show the [janggu’s natural sound, which represents] rain. I also try to change emotions [while] playing janggu, because traditional Korean music has many rhythms.”

Like the heart of traditional Korean music, rhythm vitalizes pieces. Katherine Lee, assistant professor of music and director of UC Davis’ Korean percussion ensemble, stressed the important relationship between rhythm and the janggu.

“Rhythm is an important dimension of South Korean traditional music,” Lee said. “Most [genres] feature [the janggu], as it provides the rhythmic foundation for a piece.”

Kim’s husband, Seung-Hun Hyun, is also a part of the quartet. Like Kim, Hyun has practiced p’ungmul and samulnori extensively. Hyun expressed that rhythm not only allows him to connect to the piece’s structure, but also to the thoughts of past musicians.

“Traditional Korean rhythms [represent] historical emotions [of] our ancestors’ [lives] and history,” Hyun said. “[When I play], I try to understand their emotions.”

While the featured pieces preserve the music’s historical roots, some appreciate the modernized twists in Kim’s music, through the use of audiovisual components and the accompaniment of electronic music.

Kim explained that her desire to explore new ways to play the janggu came from her encounters with many contemporary musical genres.

“I lived in Chicago for one year [and] during that time, I had collaborated with many different [types of] musicians, like audiovisual composers, electronic music composers, jazz musicians, guitarists and electronic bands,” Kim said. “I [thought of] janggu [as a] very traditional instrument, so [I wanted to try] to change the style [and] make a new style [of] janggu music.”

Whether exploring traditional or modern contexts, Kim’s performance aims to unfold Korean folk music in a way that welcomes modern and universal perspectives. Lee noted that Kim’s performance will be an enlightening way for the UC Davis community to ring in the Lunar New Year, which occurs on Feb. 19.

“[The event] will be a rare chance to experience this kind of music at UC Davis,” Lee said. “I think this speaks positively about [the UC Davis community’s] appreciation for diverse cultures on campus.”

Photo courtesy by So Ra