News in Brief: Music of Java at the Mondavi Center 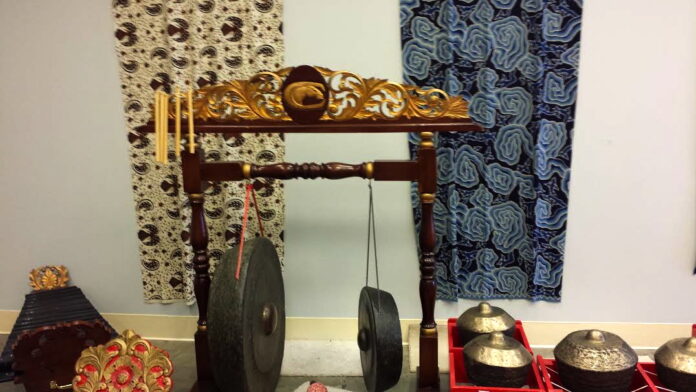 Javanese Gamelan Gadhon, a traditional ensemble of music (an array of instruments played together to make a specific type of sound and feeling) from the island of Java in Indonesia, is set to perform at the Mondavi center on Thursday Feb. 26  at 12:05 p.m. While the island of Java has several different ethnic groups each with their own distinct traditions, Javanese is the largest of these diverse groups.

This small ensemble consists of mostly tuned percussives along with other instruments, such as metallophones, hand drums called kendhang, bamboo flutes, a bowed instrument named the rebab and a female vocalist. A large gong is usually used in part of the performance, along with a number of instruments with metal keys that are hit with soft mallets.

These instruments are considered to be soft-sounding rather than loud that is juxtaposed to the singer and the bow instruments, which create a more forceful sound. All performers and instruments are arranged on the floor, with the instruments raised on intricately carved stands.

One of the performers in this ensemble is the Associate Professor and Chair of the Department of Music at UC Davis, Henry Spiller. His interest in gamelan, the larger version of gamelan gadhon, began in college, where he enrolled in a class on the musical genre. Spiller went on to study Sundanese music in Indonesia, and he describes the melodies as rhythmically relaxing.

“[Gamelan music gives the] sensation of moving slowly and quickly at the same time,” Spiller said.

While Spiller’s main focus is Sundanese music from another ethnic group in Java, he is familiar with Javanese gamelan gadhon and will be playing the metallophone in Thursday’s performance.

Spiller has played with other members of this ensemble, however, and is excited to work with them again. There are three Javanese musicians included in the performance.

Philip Acimovic, the only student member of the group, is a second-year Ph.D student at UC Davis. Acimovic majors in music composition and aside from performing in Javanese gamelan gadhon ensembles, he composes music for western chamber groups. Having studied in Java for two years, Acimovic said he has fully embraced a musical lifestyle.

“There was a lot less talking about music [in Java] than we do here [in America]; [there was] a lot more playing. Through playing and through listening, I was able to make [personal musical] progress,” Acimovic said.

“What I love so much [what] I hear [in this music] is that everyone is working so hard to keep this sense of connection,” Acimovic said.

Admission to this concert is free of charge. For more information you can visit arts.ucdavis.edu/event/javanese-gamelan-gadhon.