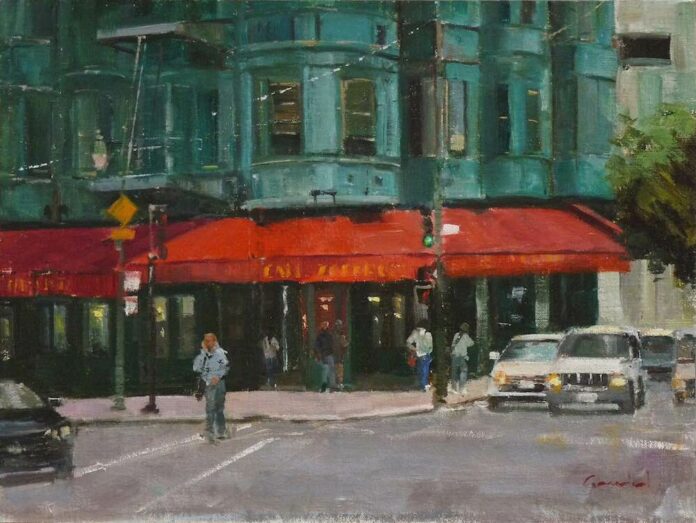 Professional painter Philippe Gandiol has led a life many would be envious of, full of adventures, travel and art. From March 11 through April 11 a solo exhibition featuring Gandiol’s work will be displayed at the John Natsoulas Gallery on First Street in Davis. His artist reception will be held on Fri., March 13. Despite the traditionally unlucky date of Friday the 13, Gandiol hopes the exhibition will be a hit.

The display, titled the Human Element, is to be comprised of cityscapes, which is a type of setting that Gandiol is fond of. The gallery will also showcase boats and ocean scenes, as well as cafe images.

Gandiol explained his reasoning behind titling the display “Human Element.”

“[I called my showcase “Human Element” because I was inspired by the] moods and stories and the human elements [that I find present in cities and towns I have visited],” Gandiol said.

Born in Paris and raised in a small town in France, Gandiol said that he has always been fond of travel and cities. He often paints images of Paris as well as stills of New York City and San Francisco, among countless other urban landscapes.

“[I] like the life and excitement of the city. [I also like] how light affects cities and [I am equally inspired by] the dark moods of night,” Gandiol said. “[I] have found that each city has it’s own personality; it is [its] own entity.”

In his artistic technique, Gandiol bridges traditional style, such as the stylings of Van Gogh and Cézanne, with contemporary subject matters, such as urban cityscapes. He also mixes abstractness with strong realities by using contrasting colors and thick paint. He said he likes to plays with a variety of textures, light elements and shadows in his work.

While Gandiol does not often portray Davis in his art, he is extremely influenced by the rich, vibrant energy present here. He tries to incorporate this attitude into his paintings.

More information about his upcoming display at the Natsoulas Gallery can be found at http://philippegandiol.com/ and http://www.natsoulas.com/.