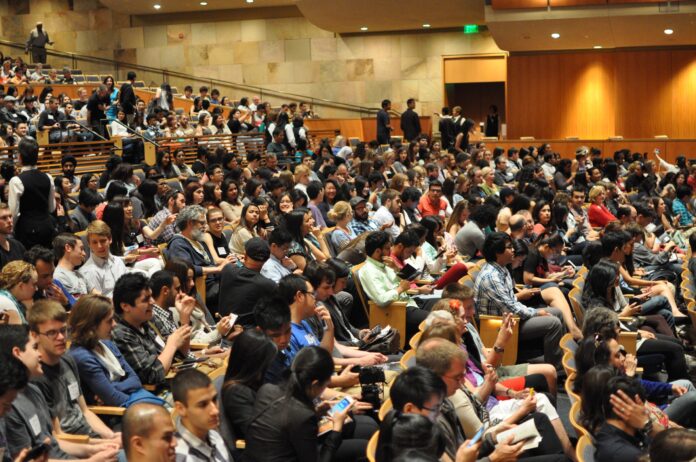 On Sunday, as the lights dimmed in the Mondavi Center, the energy in the audience only continued to rise. The annual TEDxUCDavis, an independently organized TED talk, was about to begin.

The ambience of the event suggested that the ideas to be presented — according to TED philosophy, “ideas worth spreading” — were monumental. Social media promotion for the conference claimed that attendees were more than just an audience, but rather a part of history. The larger-than-life theme, “Beyond the Conversation,” was echoed in all aspects of the event, from the projection of an expansive galaxy on the stage to an event program with aerial photographs of the planet Earth.

“I think the fact that everyone had a different story to tell also added to the theme that there is more than just what is in front of you,” said first-year communication major Kirsten Burrell. “I found it really interesting that there were speakers from many different backgrounds. I think that made it all the more thought-provoking and gave everyone more to talk about.” Originally started in 1984, the nonprofit TED organization was formed to capture the intersection of technology, entertainment and design, through short, powerful talks. The TEDx program is based on this idea as well, but designed to serve the needs of smaller, more local populations. Today, the conversations within both these groups have extended to many disciplines in over 100 languages.

During the event, attendees were first invited to critically challenge how they interact with the world around them. TEDxUCDavis began with a talk by Wendy Meluch, founder of Visitor Studies Services, which emphasized that visitors are a museum’s most valuable assets.. Meluch was followed by cognitive neuroscientist Dr. Matthias Gruber on the benefits of cultivating curiosity, and Dr. Elizabeth Sweet, who encouraged the audience to challenge today’s toy market and the gendered products available to children today. After two additional talks on strategies for successful entrepreneurship, attendees filed into the lobby of the Mondavi Center to participate in an interactive activity. Guests wrote their answers to questions like “What’s been nagging you?” or “What never gets old?” on little notepads and stuck them to large boards, generating multiple conversations. “I think [it] is such a creative activity,” said second-year economics major Patrick Tong. “I think it encourages people to look at others’ answers and maybe start discussing them. My favorite question was the one asking you to describe yourself in three words. The three words I picked were passionate, honest and confident.” Tong said he was most intrigued by the talks that encouraged self-confidence and self-discovery — in particular, yogi and flutist Cathie Apple’s talk on “the fear muscle” and how it prevents people from believing in themselves and making meaningful connections with others. For first-year mathematics major Selina Yu, who has struggled with self-confidence in past, this talk struck a chord. “I have had some really hard times at UC Davis and I feel like I’m not the person or student that I thought I was,” Yu said. “I didn’t realize that I can be more confident and proud of myself simply by changing the way I move my body.”

Yu was first introduced to TED talks through videos she found online, and now watches them on a weekly basis. Similarly, Burrell had watched and analyzed TED talks that were presented in courses she had taken at UC Davis. Both said they appreciated the accessibility and the relatability of TEDxUCDavis.

“I found listening to the undergraduate speaker really interesting,” Burell said about speaker and fourth-year biomedical engineering major Rose Hong Truong. “Just knowing that someone my age had accomplished so much and that I could do the same was really inspiring.” The success of the event, as well as its professional organization, encouraged many younger attendees to return to conferences in the future, or perhaps even take a role behind-the-scenes and help manage the event. In the spirit of going beyond the current conversation, Yu even has ideas about what she would like to see in the future. “During intermission, I wrote on one of the boards that if I could create a class on anything it would be about decision-making,” Yu said. “If I could hear a TED talk in the future about anything, I would want to hear about making the big choices that are so important in life.”