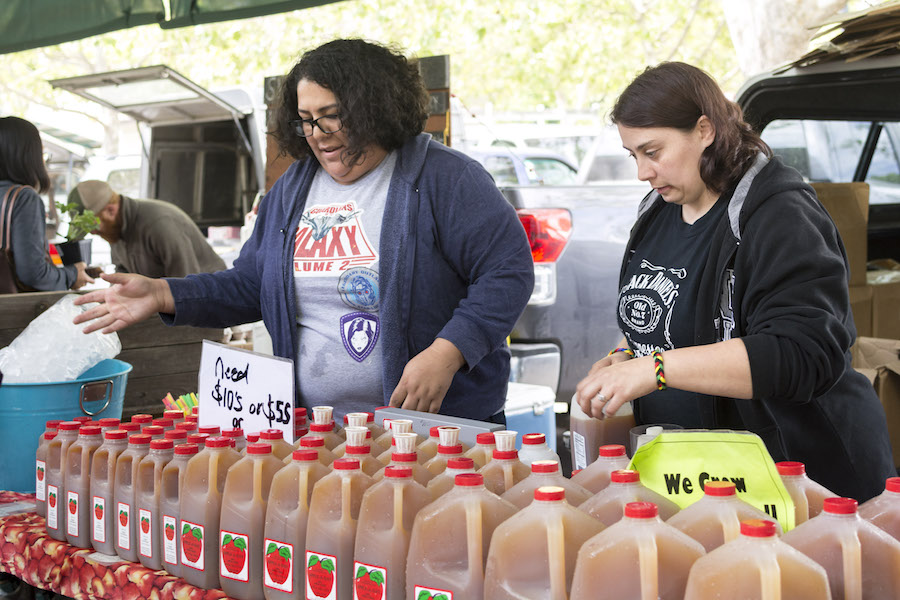 It seems like everyone and their mother has sipped the sweet nectar of the farmers market gods: the famous Apple-a-Day Apple Cider. The Aggie sat down with Melinda Garcia, the granddaughter of the the woman in charge of the famous stand, to hear the details of the town favorite — how you like them apples?

Where does the Apple Cider come from?

My grandma has the contract with the people who actually make this stuff to sell it — she works with them to bring it to the Davis Farmer’s Market. The actual place where the apples grow is on Ratzlaff ranch in Sebastopol, a county in Sonoma. At Ratzlaff, they grow apples, and the mom-and-pop operation has its own smoothie line as well. She picks up the product on Tuesday’s from the ranch and brings it back to Davis. We are Davis locals and have it ready for the Wednesday and Saturday market.

How long has she been running the stand?

My grandma has been doing this and coming to the market for 28 years. She took over for someone who was working for the people who make the apple cider after he unfortunately passed many years ago. She has been running it ever since. She has a lot of background in produce, specifically a lot with apples.

After all these years selling the cider, have there been any changes to the recipe?

It has been the same thing all these years. Except up until recently, a few months ago, we were allowed to sell raw apple cider. But the federal law intervened and said that we can no longer produce two types of juices at the same plant. So now we don’t make raw apple cider anymore, especially since we sell to stores too. So now we only sell our pasteurized version. Raw means that it has not been altered in any way — it has just been pressed and bottled. But to pasteurize it we have to flash it, which means we put it under an ultraviolet light for only a second. Some people have noticed a difference in the flavor, some people don’t notice. I think it might change the taste a little, but the quality is still there — it is just apples, no additives.

How does the cider change throughout the seasons?

The taste will change slightly as we change seasons because we can use different apples. Starting in a few months, we will have out Gravenstein apples and put that in our juice and have them for sale as well. There are a highly sought-after apple because they are good for baking, and it’s a little more tart in taste. Even though the apple cider can change by the seasons, we have our product year round — even when apples are out of season, we can freeze the juice right after we make it.

What is the apple blend right now?

Right now, our blend is Rome apples and Granny Smith apples. No matter the blend, they all taste good either way.

Where else can someone get the famous Apple Cider?

My grandma used to do seven or eight different markets a week, going from Napa to Fairfield, Downtown Sacramento and more. The Davis Farmer’s Market has been the mainstay for 28 years, though. She also has a contract to deliver to stores, like the Arden Whole Foods, all of the Dos Coyotes and the Sacramento Natural Food Co-Op using the same juice and brand.

Is there any waste in the production of the cider?

There is no waste in the making of the cider; any bad apples are just used for fertilizer.

Apple-a-Day Apple Cider is available at the Davis Farmers Market every Wednesday and Saturday. More information on where the apples are grown can be found on the ranch’s Facebook page.