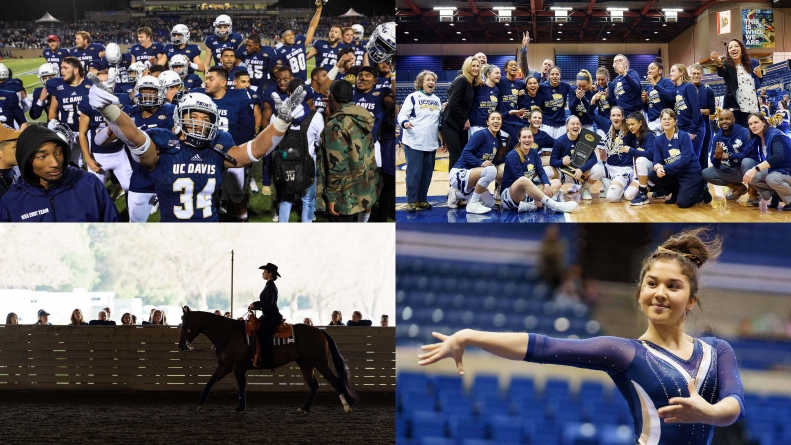 The 2018-19 year was successful for teams and individual athletes across UC Davis sports programs. Championships were won, athletes were drafted into professional leagues and some set achievements were praised by fans and supporters alike. The following is a list of highlighted achievements in UC Davis athletics this year.

Since the recent arrival of head coach Dan Hawkins, the UC Davis football team has improved at a seemingly lightning-fast pace. In 2018, the team finished with a 10-3 overall and 7-1 conference record, while going undefeated at home. The team defeated Sacramento State 56-13 in its final regular season game to earn the title of Big Sky Conference Champions. This was the first Big Sky Championship in the school’s history and its first conference championship since 2009.

Before advancing into the NCAA Football Championship Subdivision (FCS) quarterfinals, the Aggies defeated Northern Iowa to earn their first ever Division I postseason victory. An unfortunate 34-29 loss to the Eastern Washington Eagles ended the Aggies’ hopes for an FCS championship run.

Due to the team’s impressive season record and Big Sky Championship-finish, Hawkins was named Big Sky Coach of the Year and won the Eddie Robinson Coach of the Year award for the nation’s most outstanding coach at the FCS level. Wide Receiver Keelan Doss was named the Athlon Sports 2018 All-American Team and signed with the Oakland Raiders after a 1,000-yards receiving season milestone and over 100 receptions achieved in his final season with the Aggies.

Morgan Bertsch drafted by the Dallas Wings in the WNBA Draft

After shattering a number of career and single-season marks in her four years as an Aggie, Morgan Bertsch, a biomedical engineering major and forward, was drafted by the Dallas Wings in the third round of the WNBA draft in early April. Bertsch is currently the all-time leading scorer for both the UC Davis men’s and women’s basketball programs, with 2,422 career points.

Bertsch is the first UC Davis player to ever be drafted to the WNBA. She was also named 2019 Big West Player of the Year, averaging 23.6 points per game and shooting nearly 50 percent from the field in her senior year. In her collegiate career, Bertsch holds 11 different all-time program marks and is third on the Big West all-time scoring list. Just in her senior year alone, Bertsch was No. 4 in the nation in scoring, No. 9 in total points, No. 6 in free throws made, No. 10 in free throw attempts and No. 7 in field goals made.

Sporting a 25-7 overall and a 15-1 conference record, the UC Davis women’s basketball team won the Big West Conference Championship Tournament. The Aggies came back from a 17-point deficit in the third quarter to secure a 58-50 victory over Hawaii, punching their ticket to the program’s second ever NCAA Tournament appearance as a Division I program.

Unfortunately, the team’s hopes for an NCAA Championship ended in the first round of the tournament with a loss to Stanford of 79-54. Before this loss, the Aggies were on an impressive 16-game winning streak, one of the longest in the program’s history. For her impressive coaching performance during the season, Head Coach Jennifer Gross was named the league’s top coach for the third consecutive season.

Pitching the first perfect game in the program’s Division I history, sophomore Brooke Yanez also threw UC Davis’ fourth no-hitter at the Division I level. Yanez produced an amazing 25-7 record for the year, with 25 complete games pitched and a 1.03 Earned Run Average (ERA). She also struck out a total of 273 batters this season, ranking first in the program’s Division I history, third on the school’s all-time list and eighth in Big West History.

Throughout the year, Yanez earned a variety of awards, namely Softball America’s All-American second team honors and the National Fastpitch Coaches Association All-Pacific Region First Team. She is the first Aggie to receive both awards at the Division I level. Currently, Yanez is a two-time NFCA all-region selection, earning the Big West Conference Freshman Pitcher of the Year award in 2018 and the Pitcher of the Year award this past season.