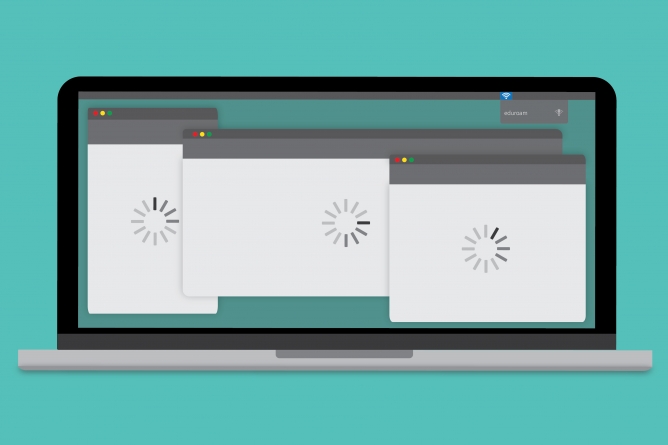 Campus Wi-Fi gets back to school jitters

In early October, with Fall Quarter just underway, many on campus encountered an inability to log in or stay logged in to the campus Wi-Fi Eduroam. These difficulties impacted students and faculty who rely on the network’s capabilities for accessing Canvas, using the library catalog and registering for classes.

Eduroam is a “world-wide roaming access service developed for the international research and education community” provided by the software management company InCommon. The system provides access to Wi-Fi over a community linked to the credentials of the users. It has its roots in Europe, where it gained traction in education facilities before crossing the Atlantic and spreading into academic institutions all over the United States. Today, there are over 10,000 Eduroam hotspots at academic-oriented facilities across the world.

Eduroam, however, is only one major component in a multipart system that distributes Wi-Fi to the thousands of devices online on campus each day.

Bill Buchannan, a communications representative from the UC Davis Informational and Educational Technology Department or IET, explained the issue.

“In early October, technical personnel noticed anomalies with the distribution of load across the wireless controllers,” Buchannan said via email. “Technical personnel implemented several mitigation measures, and asked the equipment vendor (Aruba Networks) to help diagnose the issues. By October 7, the vendor identified the software bug and recommended a code upgrade on the controllers to resolve the load-balancing issues.”

The bug arose in the software running wireless controllers from Aruba Networks, a Santa Clara, California-based wireless networking subsidiary of Hewlett Packard Enterprise company, unrelated to Incommon’s Eduroam service. The bug affected the load balancing of the network — the capacity to evenly distribute traffic between multiple servers in order to avoid excess stress on one server and to increase network responsiveness.

On Oct. 8, the UC Davis Information and Education Technology Department updated their system status report to say that the “wireless network had one of the campus controllers crash.” Traffic taken up by this specific controller was then rerouted and the “other controllers did take over for most of the wireless traffic.”

On Oct. 9, the IET department released another statement about the ongoing disruption, writing that the system was “experiencing load balancing issues between the wireless controllers.”

The primary cause of the malfunction as the “software bug on our wireless controllers that affected their ability to properly balance user connections,” Buchannan said. After learning about the bug in the system, IET took action to eradicate the defect and return the system to operational status.

“[IET] installed the upgrades as soon as we could, on Oct. 8 and 11, with follow-up work on Oct. 18,” Buchannan said. “We scheduled the work after hours, to minimize the service disruption caused by performing the upgrade.”

Despite IET’s reaction, the bug managed to affect members of the UC Davis community, many of whom were getting their bearings during a bustling start to classes.

“The repercussions were significant,” Buchannan said. “Some faculty reported that lack of Wi-Fi disrupted their teaching; Wi-Fi connections were slow in different parts of campus; and there were login problems, and systems notifying about incorrect passwords. These were all related to the Wi-Fi connectivity issues.”

The bug hindered students’ ability to keep up with their studies. One such student was Iris Sanchez, a fourth-year electrical engineering student, who commented on her back-to-school experience with the wireless network.

”Every year I’ve come here, I would open my phone or laptop and it would automatically connect,” Sanchez said. “But the first couple of days, more with my phone, it wasn’t connecting, so I had to use my data.”

“My first few lectures I tried to log into the Eduroam, but I failed using my iPad,” Kong said. “It then logs in, but I get logged out again after 10-20 minutes. It just keeps happening. It said there was an error on the account name, but I checked and there wasn’t. I thought it was very weird.”

As of now, the reason behind what caused the bug to surface so late after the programs initial installation remains unclear.

“The version of software running on the controllers was installed in March 2019, and no issues (bugs or otherwise) were experienced throughout the spring and summer,” Buchannan said. “Why the software bug manifested this fall is unknown.”

Since dealing with the initial predicament, IET remains committed to discovering what caused the bug to emerge in order to improve their ability to handle similar issues in the future.

“Since we installed the code upgrade recommended by the vendor, load has been properly distributed,” Buchannan said. “We cannot guarantee that software bugs will not manifest themselves in the future, but we are thoroughly investigating this service disruption and will use what we learn to improve our procedures.”

In the meantime, if students continue to have issues with Wi-Fi connectivity they should report it to ithelp@ucdavis.edu or call 530-754-HELP.