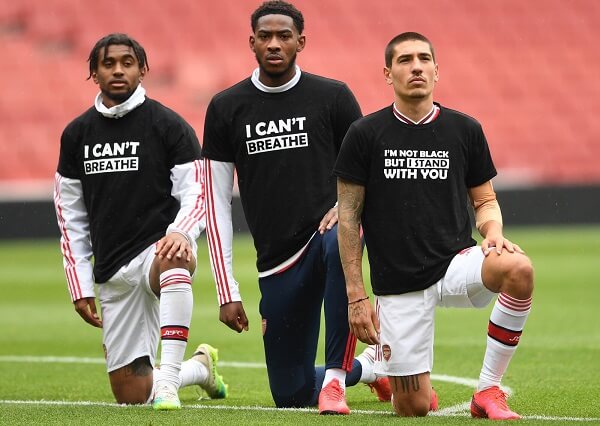 The reality of racism has struck many European football players within the past few years and numerous players have recently taken a knee before games to demand tougher actions from the infestation of racism occuring within the league’s fans.

Between September 2019 to February 2021, the European team Manchester United conducted its own research and discovered that of 3,300 posts online, 86% were racist and 8% were homophobic or transphobic. That meant that there has been a 350% increase of racism which was directed toward club players and members of the team.

Also in November of 2020, the Professional Footballers’ Association players union found 56 racist posts on their Twitter profile and 31 of them were not taken down as of April 2021.

“There have been other incidents in England, there is no getting away from that, and in Europe in general, there have been many many issues of racial incidents in one season alone. Especially in Italy,” said Craig Burley, an ESPN FC broadcaster.

One of the first major incidents was in 2018—aimed at Arsenal midfielder, Mesut Özil. He was born in Gelsenkirchen, Germany and plays for the German National team as well. He took a photo with the Turkish president, creating an opportunity and a platform for Özil to make a statement on behalf of the thousands of Turkish people mistreated, imprisoned, silenced and terrorized by the regime at the time. The situation in Turkey was only growing worse, and Özil—who was seen as well-liked in the football world—had the chance to possibly stand up for others.

Özil’s grandparents are from Turkey and he wanted to bring awareness to the situations occurring in the country. Nevertheless, German football fans considered him an outsider and Özil faced a number of obstacles when it came to receiving hateful comments.

In a statement he released on Twitter Özil said, “I am German when we win, but I am an immigrant when we lose.”

As a result, the Union of European Football Associations (UEFA) approved specific guidelines for club officials to follow if racism continued during the games—an occurrence that is well documented around Europe. In the guidelines, football fans in the stadiums only get two warnings and by the third warning the game is abandoned.

For the first warning, the referee has the authority to stop the game and make a public announcement if something racist occurs that affects the game, or if a player tells the referee. If the referee continues to hear racism coming from the stands or the problem persists, he can stop the game for five to ten minutes and request the teams to go into their dressing rooms. Again another announcement is made to that effect. As a final resort, if the racist behavior continues, the referee can cancel the rest of the game.

This had still been an ongoing issue and the protocols were first used when yet again the problem resurfaced during a match between Chelsea and Tottenham back in January 2020. A Chelsea defender Antonio Rudiger, who is Black, was targeted with racist chants by Tottenham’s crowd. It was reported by Chelsea’s captain to the referee in the first half of the game.

The referee then went over to the sidelines to inform officials, and ultimately, not one or two stadium announcements were made, but three until the game was finally called off. In a big matchup like Chelsea and Tottenham, the action being taken let everyone know that this was a very serious issue.

“It is really sad to see racism again at a football match, but I think it’s very important to talk about it in public,” Rudiger posted on Twitter following the incident. “If not, it will be forgotten again in a couple of days (as always)… When will this nonsense stop?”

As of February 2021, the European football body launched investigations against a UEFA Romanian referee for referring to Pierre Achille Webo, a Turkish club Basaksehir’s assistant coach, in an inappropriate way. The referee was calling Webo racial slurs and the UEFA argued that the referee violated a code of conduct of the General Terms and Conditions for Referees that states to “behave in a professional and appropriate manner”—something he did not do.

This year in April, English soccer fans decided to boycott social media for four days in response to the ongoing and sustained discriminatory abuse received online by players and many others connected to the game. With no fans in attendance, the players and everyone have been put on notice of the uptick of abuse. The Premier League, English Football League, Women’s Super League, Women’s Championship, FIFA, the English cricket and rugby clubs, the British Lawn Tennis Association and the U.S. Open tennis tournaments all participated in this movement, not posting anything for that period of time to bring awareness to the big issue.

“I’m really proud to hear that there are so many organizations getting involved. I’m not sure why Formula One is not a part of that,” said the only Black racer in Formula One, Lewis Hamilton. “I do believe that social media companies need to do more. There’s algorithms, there’s things they’re able to see, they’re able to take steps to help and create more of an anti-racist society. That’s what we’ve really got to be pushing towards.”

No matter the severity of racism, there will likely always be several sports and leagues around the world that are willing to speak up and implement new policies to protect everyone equally. The recent developments have been another move in the attempt to try to mitigate racist acts within European soccer.
Written by: Katherin Raygoza — sports@theaggie.org