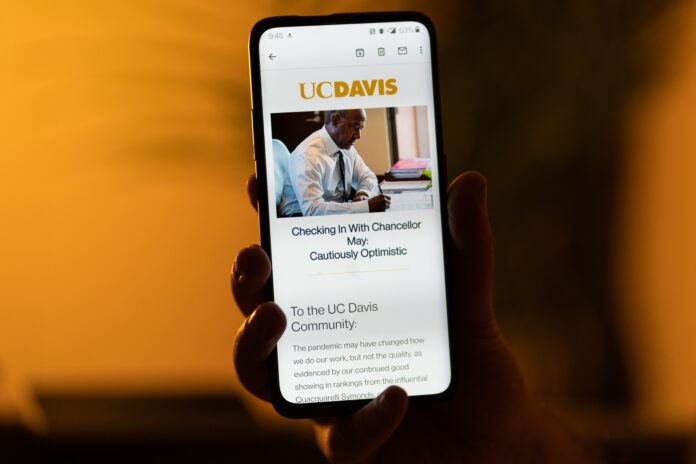 The subject line ‘Cautiously Optimistic’ won best Gary May email subject line in this year’s Best of Davis competition by 35.4% of the vote. Students are thrilled to open their inboxes every Friday afternoon to Chancellor Gary May’s Friday update containing all of the essential information regarding campus affairs. The sharp and sometimes ominous subject lines of May’s emails are a smash hit among students.

May began sending out the weekly updates, called ‘Checking in With Chancellor May,’ to keep students, faculty, staff and parents informed and connected during the pandemic.

Roshets said that while she hopes that May writes the subject lines by himself, she suspects the chancellor is receiving a little help from his team.

“I want to say that he does, but at the same time it is possible for someone to write them for him,” Roshets said. “I feel like he assists with them, but I don’t think he writes them fully himself.”

May confirmed these suspicions.

“Subject lines are usually suggested to me by staff, and I either accept them or modify them,” May said via email.

The subject can rope readers in when there is an element of mystery, such as ‘Cautiously Optimistic.’ Roshets said that she appreciates how the subject lines align with the content of the Friday update, which always piques her interest.

“They correlate with what he talks about, so I do find them interesting,” Roshets said. “I had a conversation with someone that said, ‘Chancellor May’s email this week is “Cautiously Optimistic,” what is he going to talk about?’”

May’s weekly updates aren’t universally treasured. Roshets said that when she ran into a friend who also attends UC Davis in her hometown, they condemned May’s emails. The friend called the Friday update an opportunity for the chancellor to boast about successful endeavors like Aggie Square and Healthy Davis Together.

May and his staff’s creative process begins once the update has been compiled and usually the perfect phrase for the subject line comes to them quickly.

“[Subject lines] are written after the update is drafted,” May said. “It doesn’t take very long—maybe a few minutes.”

May wholeheartedly agrees with the vote, explaining that the phrase “cautiously optimistic” encapsulates his spirit entirely.

“I love the people’s choice; it captures my entire mood as we’ve navigated the pandemic at UCD,” May said.
Written by: Rebecca Gardner — features@theaggie.org